What is Current Mirror? – Circuit Diagram and its Workings

The two-transistor current source, also called a current mirror, is the basic building block in the design of integrated circuit current sources. Figure 20.25 (a) depicts the basic current-source circuit, which consists of two matched or identical transistors Q1 and Q2, operating at the same temperature, with their base terminals and emitter terminals connected together. The base-emitter voltage, VBE is, therefore, the same in the two transistors. Transistor Q1 is connected as a diode; consequently, when the supply voltage is applied, the base-emitter junction of transistor Q1 is forward biased and a reference current IREF is established. 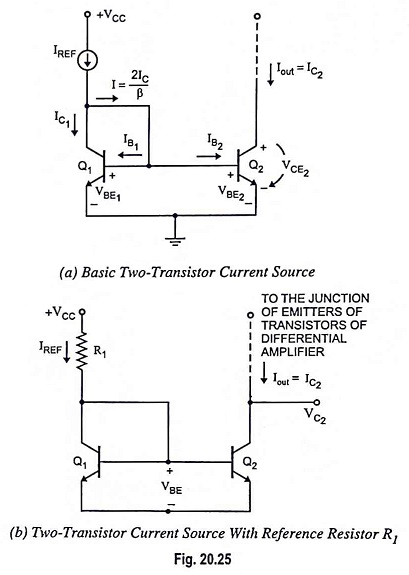 Although there is a specific relationship between IREF and VBE1, VBE1 can be thought of as the result of IREF. Once VBE1 is established, it is applied to the base-emitter junction of transistor Q2. The applied VBE2 turns Q2 on and generates the output current, which is employed to bias a transistor or transistor circuit.

where VBE is the base-emitter voltage corresponding to collector current (IREF).

Connecting the base and collector terminals of a BJT effectively provides a two-terminal device with ampere-volt characteristics that are identical to the iC versus vBE characteristic of the BJT.

Current Relationships: Figure 20.25 (a) depicts the current in the two-transistor current source. Since VBE is the same in both devices, and the transistors are identical, then IB1 = IB2 and IC1 = IC2. Transistor Q2 is assumed to be biased in the forward-active region. Applying Kirchhoff’s current law to the collector node of transistor Q1, we have

The current IREF set by VCC and R1 is mirrored in the current into the collector of transistor Q2.

Transistor Q1 is referred to as a diode-connected transistor because its base and collector are shorted together.

The operation of the current mirror may be described as follows: 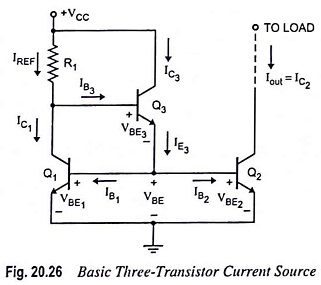 Applying Kirchhoff’s current law to the collector node of transistor Q1, we have

The output or bias current is then

The reference current is given by 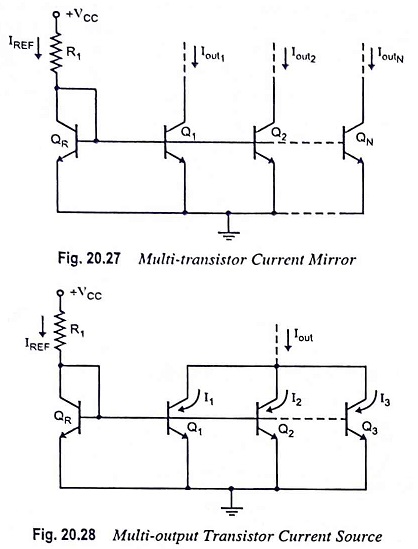 The relationship between each load current and the reference current, assuming all transistors are matched, is

The collectors of multiple output transistors can be connected together, changing the load current versus reference current relationship. For an example, the circuit depicted in Fig. 20.28 has three output transistors with common collectors and a load current Iout. Assuming that transistors QR, Q1, Q2 and Q3 are all matched if the current gain β is very large, the base currents can be neglected and I1 = I2 = I3 = IREF, and the output current lout = 3IREF. This process is not recommended for discrete devices, since a mismatch between devices will usually cause one device to carry more current than the other devices. Connecting transistors in parallel increases the effective base-emitter area of the device. In actual IC fabrication, the base-emitter area would be doubled or tripled to provide an output current twice or three times the value of IREF.

This is another configuration of a three-transistor current source, known as a Wilson current source. The circuit is shown in Fig. 20.29. This circuit has a large output resistance. We again assume that all the transistors are identical, with IB1 = IB2 = IB; IC1 = IC2 and VBE1 = VBE2. 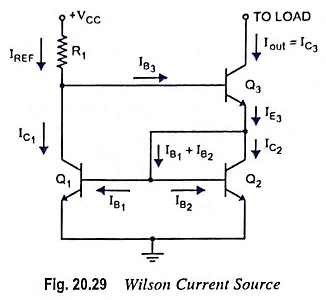 Applying KCL at the emitter of transistor Q3, we have

Applying KCL at the collector of transistor Q1

is extremely small error for modest values of β.

The solution to above problem is a circuit shown in Fig. 20.30, called a Widlar current source. This circuit is particularly suitable for low value of current. The circuit differs from the basic current mirror [Fig. 20.25 (b)] only in the resistance RE that is included in the emitter lead of transistor Q2. A voltage difference is caused across emitter resistor RE1 so that the VBE2 is lesser than VBE1. A smaller VBE produces a smaller collector current. It means that the load current Iout is lesser than reference current IREF. 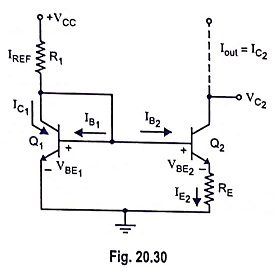 From the circuit, we see that

Equation (20.70) provides the relationship between the reference and bias currents. Sometimes, emitter resistances are used in both the transistors Q1 and Q2 as depicted in Fig. 20.31. 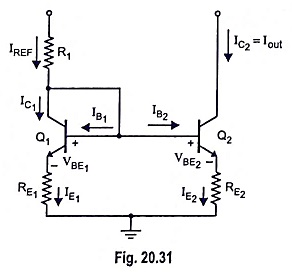 Applying KVL in the base-emitter loop, we have