An Static Induction Thyristor (SITH) or SI-thyristor is a self-controlled GTO-like on-off device commercially introduced in Japan in 1988. Similar device, known as field-controlled thyristors (FCT) or field-controlled diode (FCD), were developed in USA. The device symbol is shown in Fig. 11.10. 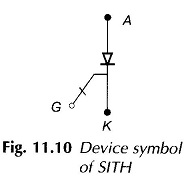 It is essentially a P+ NN+ diode. Similar to SIT, SITH is a normally on device with the N-region saturated with minority carrier. The turn-off behavior of SITH is similar to that of GTO. It is a self-controlled GTO-like high power device (1200 V, 800A).

Its general comparison with GTO is given below.