The maximum efficiency is achieved in carnot cycle.

To increase the efficiency of the actual engine, ie to approach the carnot cycle efficiency, the total heat should be supplied at constant temperature T1 and rejected at T2. This can be achieved only by using wet vapour and not by using superheated vapour. 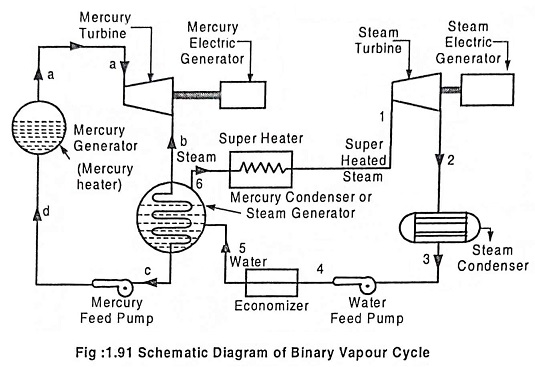 The thermal efficiency depends on only higher temperature T1 since lower temperature T2 is fixed by the natural sink to which heat is rejected. So T1 should be maximum to the possible extent.

But we can not use mercury alone since its saturation temperature at atmospheric pressure is high (357°C). So binary vapour cycle using two fluids – mercury and water are used to increase the thermal efficiency.

The mercury vapour leaving the mercury turbine is condensed and the heat released during this condensation is utilized to heat and evaporate the feed water to become steam and this steam is expanded in the steam turbine to produce work. Mercury turbine also produces work. 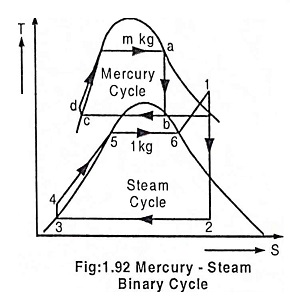