In order to increase bandwidth, double tuned amplifiers are preferred, but their alignment is difficult. A much better overall response can be had by stagger tuning, as illustrated in Fig. 18.22. 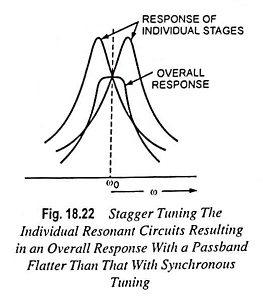 If two or more tuned circuits are cascaded and tuned to the same frequency, it is called the synchronous tuning. The overall bandwidth is reduced. On the other hand, if the tuned circuits are cascaded and they are tuned to different frequencies, it is possible to have increased bandwidth with more desirable characteristics (i.e., flat passband with steeper sides). This technique is called the stagger tuning. 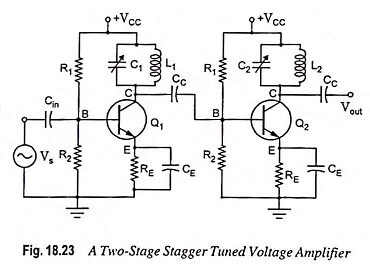 The main advantage of stagger tuned amplifier is increased bandwidth. Its drawbacks are reduced selectivity and critical tuning of many tank circuits. They are used in RF amplifier stage in radio receivers.

As bandwidth is given as B = f0/Qe and under 3-dB frequency condition δ = 1/2Qe, the equation for bandwidth can be written as

Multiplying the relative gains of the two amplifiers, we have the overall gain function as

The magnitude of the resultant function is