When a system absorbs energy in some form or other, it may be partly re-emitted as radiation. This phenomenon is called luminescence. Luminescence may occur in solids (crystals or glasses) as well as in liquids and gases.

The mechanism of the process by which luminescence is caused varies from comparatively simple to rather complicated one. In the simplest cases, the process consists of two immediately connected parts viz. the absorption of energy and the emission of a corresponding radiation. In the more complicated cases additional process occurs in between, such as transfer of energy or a partial dissipation of the excitation energy.

The early studies of luminescence have revealed one important conclusion that the frequent ability of a material to exhibit a luminescence is associated with the presence of activators. These activators may be impurity atoms occurring in relatively small concentration in the lost material. There are also a number of pure materials which luminesce effectively. A number of luminescent crystal solids, also called phosphors, are listed below:

Types of luminescence may be distinguished by the excita­tion mechanism. If carriers are excited by photon absorption, the radiation resulting from the recombination of the excited carriers is called photoluminescence; if the excited carriers are produced by high-energy electron bombardment of the material, the mecha­nism is called cathodoluminescence; if the excitation occurs due to introduction of current into the sample, the resulting lumines­cence is called electroluminescence. Other types of excitation are also possible, but we are mainly concerned with electrolumi­nescence especially with injection electroluminescence, that is, optical radiation obtained by injecting minority carriers into the region of a semiconductor P-N junction where radiative transi­tions occur.

A new phenomenon was observed when the voltage is applied to a layer of ZnS, MnCI phosphor during excitation by ultraviolet or X-rays. The luminescent layer (about 10 micron thick) is deposited by vapour reaction. When the layer is excited by ultraviolet or X-rays it emits the yellow luminescence, typical of manganese, the simultaneous effect of the electric field enhances the brightness significantly. The dependence of enhancement of excitation intensity for 3,650 Å is depicted in Fig. 25.9 where the average field is fixed at 105 V/cm. For the given range the enhancement varies inversely as the square root of the excitation intensity. 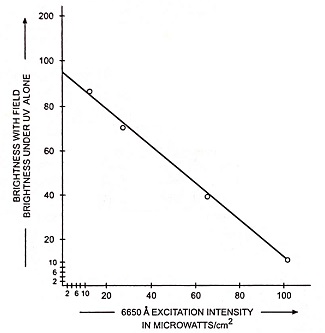 By computing the visible output in relation to the incident ultraviolet, it is found that for low excitation intensity, as many as 10 photons of visible light are generated for each photon of 3,650 Å. For higher UV intensities, the photon amplification ratio reduces until it reaches unity in the neighborhood of 100 μW/cm2.

There are two basic mechanisms for production of electroluminescence. One mechanism is photoemission in the act of electron-hole recombination. When current is passed in a forward direction of P-N junction, electrons from the N-region are swept into P-region and recombine with holes. Free electrons are in the conduction band of energy levels, while holes are in the valence energy band. Therefore, the electrons are at high energy levels than the holes. For the electrons to recombine with the holes they must give some of their energy. Typically, these electrons give up energy in the form of heat and light. In silicon and germanium the greater percentage is given up in the form of heat and the emitted light is insignificant.

In other materials such as gallium arsenide phosphide (GaAsP) or gallium phosphide (GaP), the number of photons of light energy emitted is sufficient to produce a very visible light source. The light-emitting diodes (LEDs) and the P-N junction laser diodes are examples of this phenomenon. In these devices electrical energy, in the form of a current, is converted directly into photon energy.

The second mechanism for electroluminescence is photon emission following electron impact excitation of an activator atom. The process has been observed in ZnS : Cu. The electroluminescence of ZnS : Cu single crystal has been interpreted on the basis of a mechanism that involves the production of charge carriers in a high field region where acceleration of the charge carriers to the kinetic energies sufficient for the excitation or ionization of activator systems by inelastic collisions takes place.

Rupture may be avoided by the high field region being sufficiently thin so that required number of multiplications for breakdown cannot occur.

The alternative electroluminescent mechanism of minority charge carrier injection followed by capture by appropriate activator systems also provides a method of radiation amplification in the phosphors. In this case, the photons generate charge carriers which are trapped thereby producing a space charge, facilitating the transport of carriers of opposite sign which are subsequently captured by the activator systems resulting in ionization. Capture of the majority charge carrier then leads to photoemission, conceivably in greater quantity than the initial photon absorption.

The simplest example of luminescence from a semiconductor occurs for direct excitation and recombination of an electron-hole pair (EHP). When the recombination takes place directly rather than via a defect level, band gap light is given off in the process. For steady-state excitation, the recombination of electron-hole pairs takes place at the same rate as the generation, and emission of one photon is caused for each photon absorbed. Direct recombination is a fast process, the mean lifetime of the electron-hole pair is usually of the order of 10-8 s or less. Thus the photon emission ceases within approximately 10-8 s after the excitation is turned off. Such fast luminescent processes are usually called the fluorescence. In some materials, called the phosphors, however, emission continues for periods up to seconds or minutes after removal of excitation. Such slow processes are called phosphorescence.

The colour of light emitted by a phosphor such as ZnS depends mainly on the impurities present, as many relative transitions involve impurity levels within the band gap. This selection of colours is particularly useful in the fabrication of a colour television screen.

One of the most common examples of photoluminescence is the fluorescent lamp. Typically such a lamp is composed of a glass tube filled with gas (e.g., a mixture of argon and mercury), with a coating of fluorescent material inside the tube. When an electric discharge is caused between electrodes in the tube, the excited atoms of the gas emit photons, largely in the visible and ultravio­let (UV) regions of the spectrum. This light is absorbed by the luminescent coating, and the emission of visible photons occurs. The efficiency of such lamps is considerable higher than that of incandescent lamps, and the wavelength mixture in light given off can be adjusted by proper selection of the fluorescent material.