General form of an L-C Oscillator: 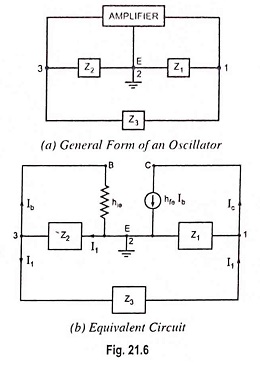 In the general form of an oscillator depicted in Fig. 21.6 (a), any of the active devices such as vacuum tube, BJT, FET or op-amp may be used in the amplifier section, Z1, Z2 and Z3 are the reactive elements constituting the feedback tank circuit which determines the frequency of oscillation. Here, Z1 and Z2 serve as an ac voltage divider for the output voltage and feedback signal. Thus, the voltage across Z2 is the feedback signal. The equivalent circuit is drawn in Fig. 21.6 (b) with the following two assumptions:

Let us determine the load impedance between output terminals 1 and 2. Here Z2 and hie are in parallel and their resultant impedance is in series with impedance Z3.

The equivalent impedance is in parallel with impedance Z1. Thus load impedance between output terminals is given as

The output voltage between terminals 1 and 2 is given as

Applying the criterion of oscillation i.e. Aβ = 1, we have

This is the general equation for the LC Oscillator Circuit.