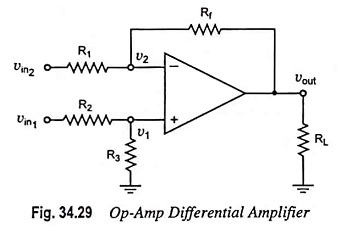 As already known, in a Op Amp differential amplifier, neither input is grounded. This reduces the amount of noise injected into the amplifier, because any noise appears simultaneously on both input terminals and the amplifying circuitry rejects it being a common mode signal.

Since the circuit has two inputs vin1 and vin2, superposition theorem will be used for determination of voltage gain of the amplifier.

When vin1 is zero volt, circuit becomes an inverting amplifier and, therefore, output voltage due to vin2 is

Now assuming vin2 = 0, the circuit is a noninverting amplifier having a voltage-divider network consisting of resistor R2 and R3 at the noninverting input. Therefore,

and output due to vin1 then is

The above equation resembles Eq. (34.21) and hence the gain of the differential amplifier is same as that of inverting amplifier.

Such a circuit is very useful in detecting very small differ­ences in signals, since the gain Rf/R1 can be selected to be very large. For instance if Rf = 500 R1, then a small difference of vin2 – vin1 is amplified 500 times.

The Op Amp differential amplifier can be operated in three different modes:

2. Differential Mode: In this mode of operation, magnitude of the two input signals may be same or different but their polarity is opposite at every instant of time i.e.,

3. Common Mode: In this mode the two input signals are same in magnitude as well as in phase at every instant of time

and output voltage is zero.

Thus there is no output voltage when the differential amplifier is connected in common mode.

The input resistance, Rin of the Op Amp differential amplifier is the resistance worked out looking into either one of the two input terminals with the other grounded.

Hence with vin1 = 0 V, the circuit given in Fig. 34.29 becomes that of an inverting amplifier, the input resistance of which is

Similarly with vin2 = 0 V, the circuit given in Fig. 34.29 becomes that of noninverting amplifier whose input resistance is given as

Equations (34.43) and (34.44) reveal that the input resistance looked into by the signal sources vin1 and vin2 is not the same. For proper functioning of amplifier circuit given in Fig. 34.29, it is necessary that resistances R1 and (R2 + R3) are made much larger than source resistances so as to avoid loading of signal sources. In cases where a variable gain is required, the circuit given in Fig. 34.29 is modified by introducing a potentiometer as depicted in Fig. 34.30. The voltage gain can be varied from the closed-loop gain of -2Rf/R1 to the open-loop gain of A. 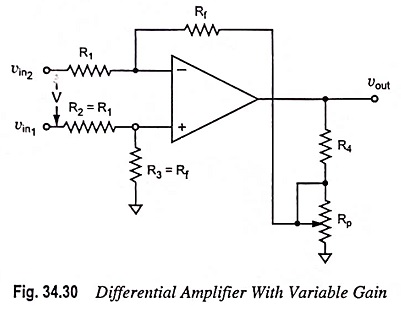