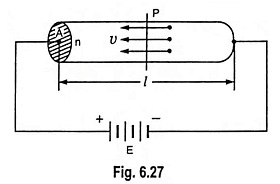 The force F on the particle of charge q when an electric field E is applied is given as F = qE, so the force acting on an electron having charge e on it is given as

where a is acceleration of electrons due to applied field E

Because of collisions of electrons during motion, the electrons will not get accelerated indefinitely. In fact, their velocity will fall to zero. If τ is the relaxation or collision time, the average velocity of electrons, known as drift velocity is given as

Since the current in a conductor is defined as the rate of change of charge per unit time, current I is given as

The current density J, defined as the current per unit area is given as

The above equation may also be written as

where ρ is the charge density in coulombs/m3 = en

For a particular material, the quantity ne2τ/m in above equation is constant at particular temperature and is known as electrical conductivity ‘σ’ of the material and thus

We know that the resistance R of a conductor is given as R = ρ l/A where ρ is the resistivity of material and l is the length of conductor. Thus

which is nothing but ‘Ohms’ law.

Electrical Conductivity of Metals is also given as

where μe = eτ/m is the mobility acquired by electrons due to presence of electric field.

Using Eq. (6.42), the mobility of electrons can also be expressed as

Thus, the mobility of electron in the metal is defined as the steady-state drift velocity per unit electric field.

Let λ be the mean free path and v’ be the root mean square velocity of electrons, then the relaxation time (commonly known as mean time between collisions) τ is given as

Now the electrical conductivity σ can be expressed as

Since electrical resistivity ρ is reciprocal of electrical Conductivity of Metals σ,

Above result shows that the resistivity varies as √T whereas actually it is found to vary linearly with temperature.