Millers Theorem and its Equivalent Circuit:

Millers theorem – Consider an arbitrary circuit shown in Fig. 15.13(a). As part of a larger network that is not shown, we have isolated two circuit nodes, labelled 1 and 2, between which an impedance Z is connected. Nodes 1 and 2 are also connected to other parts of the network, as signified by the broken lines emanating from two nodes. Furthermore, it is assumed that somehow it has been determined that the voltage at node 2 is related to the voltage at node 1 by equation

In typical situations K is a gain factor that may be positive or negative and that has a magnitude usually greater than unity (i.e., K > 1). This, however, is not an assumption for Millers theorem. 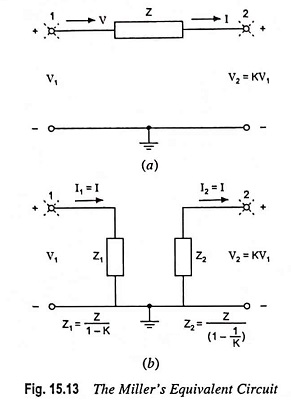 to obtain the equivalent circuit illustrated in Fig. 15.13(b).

In the circuit shown in Fig. 15.13(a), the only way that node 1 “feels the existence” of impedance Z is through the current I that Z draws away from node 1. Therefore, in order to keep this current I unchanged in the equivalent circuit, the value of Z1 must be selected so that it may draw an equal current