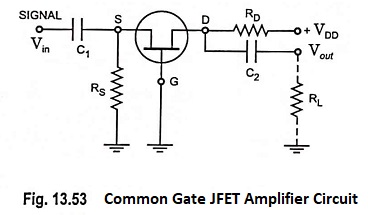 So input impedance of FET,

The input impedance of the circuit is Zs || RS. So,

Actually speaking rd and RD are also involved in Zin but their effect is negligible.

Again this equation gives the impedance looking into the device drain terminal. The circuit output impedance

The above equation for voltage gain is the same as that in case of a common source circuit, except that there is no minus sign. It means that output voltage and input voltage are in phase.