What is Optoelectronic Devices?

The devices that convert electrical energy into optical radiations are known as emitters. The devices that convert optical radiations into electrical energy or detect optical signals through electronic process fall under the category of sensors. The optocouplers combine light generating and light sensitive units in a single package. The present-day family tree of optoelectronic devices is shown in Fig. 25.1. 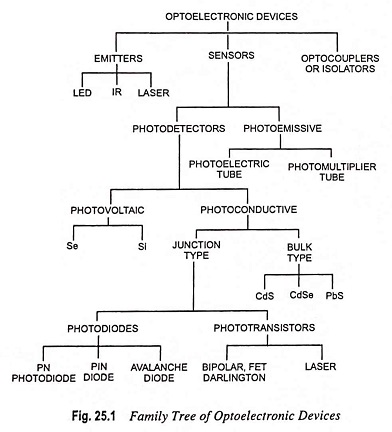 The characteristics of photodetectors and solar cells are dependent on optical energy, which is absorbed in a semiconductor and creates excess EHPs generating photocurrents. Photodetectors are the semiconductor devices that can be used to detect the presence of photons and convert optical signals into electrical signals. The photoconductor, in which photon-generated excess EHPs change the conductivity of a semiconductor, is perhaps the simplest type of photodetector: Photodiode is a two-terminal device designed to respond to photon absorption. It is a P-N junction diode operated with a reverse-bias voltage applied. The excess electrons and holes produced in the space charge region are separated very quickly by the electric field and thus photocurrent is produced. The output terminals of the solar or photovoltaic cell are connected to a resistive load in order to convert input optical power into electrical power.

Electroluminescence is the generation of light by an electric current passing through a material under an applied electric field. Excess carriers are created and then recombine, which may cause emission of photons in a forward biased PN junction—such a device is called the light-emitting diode (LED). The LED photon emission is due to a spontaneous transition of an electron from the conduction to the valence band, resulting in a fairly wide spectral output bandwidth. LED spectral output has a relatively wide bandwidth of wavelengths but emission spectrum is narrow enough so that a particular colour (red, orange, yellow or green) will be visible to the eye, provided that the output is in the visible range. In case the light-emitting diode device structure and operating mode are modified, the device can be operated in a new mode in which the bandwidth is very narrow and the photon output is coherent. This new device is referred to as a laser diode. The laser diode relies on the concepts of stimulated emission and population inversion, and on the use of an optical resonant cavity.

Optoelectronic devices have many practical applications. They can be employed for generating a wide variety of stationary or moving visual displays. They can be used to provide an automatic switching or alarm action in the presence or absence of a visible or invisible light source, or to provide a similar action when a person or object moves within the range of a generated light source. They can be employed to provide remote control action via an infrared light generator and a remotely placed detector. In some applications, fibre-optic cables can be used to form a low-loss closed circuit connecting link between a code-modulated light generator and a matching remotely placed light-sensitive device, thus forming an interference free data link.

Any light source emits energy only over a certain range of frequencies or wavelengths. A graph of energy output plotted against either frequency or wavelength is called the emission spectrum for the light source. A light sensitive device is sensitive only to a certain range of radiation frequencies. A graph of device current, voltage, or resistance plotted against frequency is known as its spectral response. For a given photosensitive material, there is a minimum radiation frequency (or maximum wavelength) that can produce a photoelectric effect; this frequency is known as the threshold frequency.

The total light energy output, or luminous flux from a source is defined as the total quantity of light energy emitted per second from a luminous body. It is represented by symbol F or Φ and is measured in milliwatts or in lumens, where 1 lumen = 1.496 mW.

The conception of luminous flux help us to specify the output and efficiency of a given light source.

When the light falls upon any surface, the phenomenon is called the illumination. It is defined as the number of lumens falling on the surface per unit area. It is denoted by symbol E and is measured in lumens per square metre, or lux or metre-candle. If a flux of Φ lumens fall on surface of area A, the illumination of that surface is E = Φ/A lumens/m2 or lux (lx).