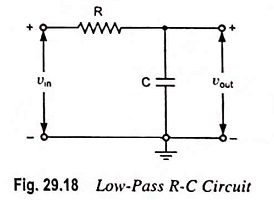 For a sinusoidal input the waveshape of the output will remain the same; the output will differ only in amplitude and phase angle depending on frequency of the input signal. So only gain of the circuit needs consideration.

The current through the circuit is given as

From the above equation it is obvious that for a circuit, the gain A depends upon the frequency of the input signal. 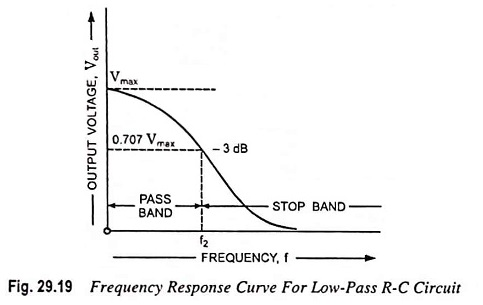 Now magnitude of A and phase angle θ are given as

So f2 is the frequency at which capacitive reactance XC is equal to the resistance of the circuit. 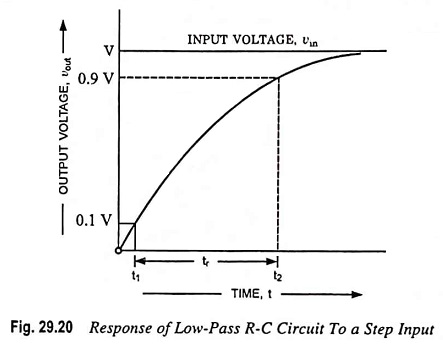 The time taken by the capacitor to rise from 0.1 to 0.9 of its final value is called the rise time. It indicates how fast the circuit responds to a discontinuity in voltage.

Let the time required for output voltage to attain one-tenth of its final value be t = t1. So at t = t1

Now if t2 is the time required by the capacitor to attain 0.9 times its final value, then

As the lower cutoff frequency f1 for the circuit is zero, therefore, Bandwidth Δf = f2.

Thus output for pulse input is given as

At t = tp, input voltage becomes zero but since the voltage across a capacitor cannot change instantaneously, output remains the same as it is at t = tp. After that capacitor starts getting dis­charged through resistance R and voltage across it drops exponentially to zero. Hence output voltage for t > tp.

The above equation is discharging equation of capacitor de­layed by time tp. Hence output voltage must be decreasing towards zero for t > tP. This is illustrated in Fig. 29.21. 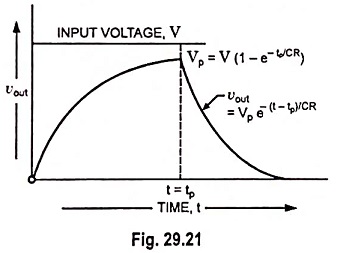 It shows that output voltage will always extend beyond pulse width tp. This is because the charge stored on capacitor during pulse cannot leak off instantaneously.

It is also observed from Fig. 29.21 that output shape is dif­ferent from that of input i.e., there is distortion. Distortion may be reduced by making rise time much smaller than pulse width tp. For a circuit having f2 equal to 1/tp, tr = 0.35 tp. For this value of tr output will be of the shape shown in Fig. 29.22, which is not exact but approximately reproduction of the input. 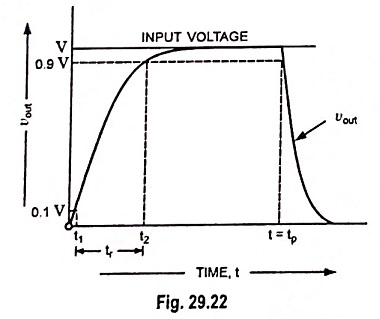 As a thumb rule it can be said :

A pulse shape will be preserved if the 3-dB frequency is approximately equal to the reciprocal of the pulse width (PW).

Thus to pass a 0.2 μs pulse reasonably well needs a circuit with an upper cutoff frequency of the order of 5 MHz.

Consider a periodic waveform whose instantaneous value is con­stant at V’ w.r.t. ground for a time T1 and then changes abruptly to V” for a time T2. A reasonable reproduction of the input is obtained if the rise time tr is small compared with the pulse width. The steady-state response is drawn in Fig. 29.23 (b). If the time constant RC is comparable with the period of input square-wave, the output will have the appearance, as illustrated in Fig. 29.23 (c). If the time constant is very large compared with the input wave period, the output will consist of exponential sections which are essentially linear as illustrated in Fig. 29.23 (d). 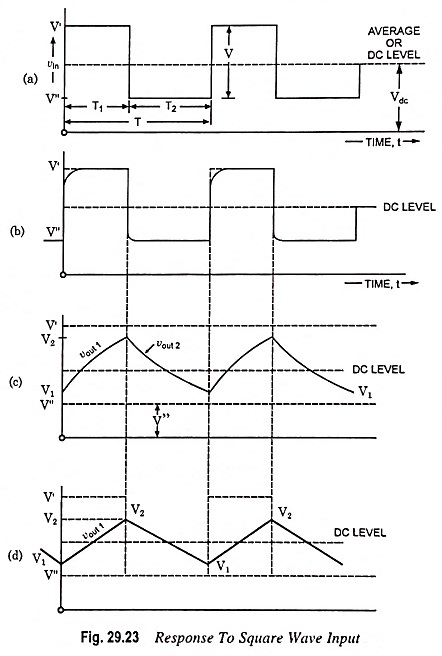 Since for succeeding cycles capacitor may remain charged to some value at the beginning of the new cycle, so taking a generalized case, and then analyzing the circuit shown in Fig. 29.18 for 0 < t <T1.

Initially charged capacitor is equivalent to an uncharged ca­pacitor in series with a voltage source of magnitude and polarity equal to that initial charge. This is illustrated in Fig. 29.24.

Applying Kirchhoff’s voltage law to the circuit we have 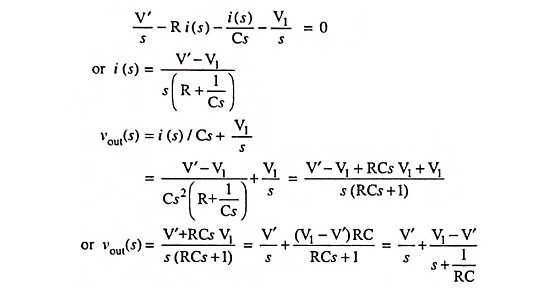 Taking inverse Laplace we have

Similarly for T1 ≤ t ≤ T2, if initial voltage across capacitor is V2 and input voltage is constant at V” and output voltage = Vout2 (say)

If peak-to-peak voltage of input square-wave is V, then V′ = V/2

A waveform which is zero for t < 0 which increases linearly with time for t > 0, v = αt, is known as a ramp or sweep voltage. Assume that the Low Pass RC Circuit shown in Fig. 29.18 is excited by a ramp input vin(t) = αt where α is the slope of the ramp.

Since at any instant input voltage vin is equal to the pd across resistor plus pd across the capacitor,

The voltage across the capacitor is 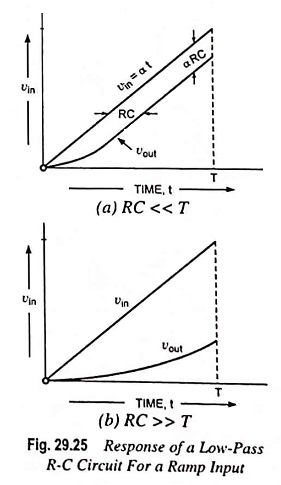 where f2 is the upper 3-dB frequency.

This shows that a quadratic response is obtained for a linear input and thus the circuit acts as an integrator for RC >> T. 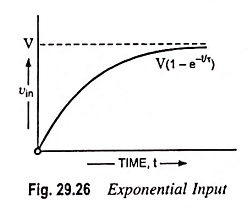 When an exponential input

Defining x and n by

The solution of Eq. (29.37), subjected to the condition that initially the voltage across the capacitor is zero, is given by the expression

The parameters x and n are defined by x ≡ t/τ and n ≡ RC/T.

If an exponential of rise time tr1 is passed through a Low Pass RC Circuit with rise time tr2 = 2.2 RC, the rise time of the output waveform tr will be given by an empirical relation,

This is same as the rise time obtained when a step is applied to a cascade of two circuits of rise times tr1 and tr2 assuming that the second circuit does not load the first one.

R-C circuits with time constant larger than the time period of the input wave (i.e., RC >> T) are used as bypass capacitors. Low-pass filters are also employed in generation of triangular and ramp waveforms. It also finds application in discrimination between pulses of different lengths.

Integrators are almost invariably preferred over differentiators in analog computer applications. The reasons are given be­low: