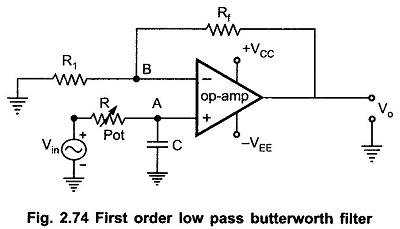 The resistances Rf and R1 decide the gain of the filter in the pass band.

By the potential divider rule, the voltage at the noninverting input terminal A which is the voltage across capacitor C is given by,

As the op-amp is in the noninverting configuration,

The Vo/Vin is the transfer function of the filter and can be expressed in the polar form as,

The phase angle Φ is in degrees.

The equation (7) describes the behavior of the low pass filter.

The rate of decrease in gain is 20 dB/decade i.e. the decrease can be indicated by a negative slope in the frequency response, as – 20 dB/decade.

1) Choose the cut off frequency, fH.

2) Choose the capacitance C usually between 0.001 and 1 μF. Generally, it is selected as 1 μF or less than that. For better performance, mylar or tantalum capacitors are selected.

Hence, as fH and C are known, calculate the value of R.

4) The resistances Rf and R1 can be selected depending on the required gain in the pass band.