The prototype high pass filter T and π sections are as shown in the Fig. 9.9. 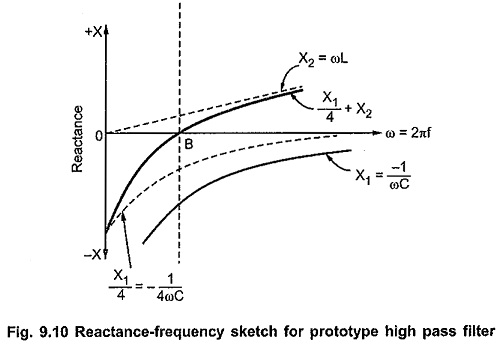 The reactance curves are as shown in the Fig. 9.10.

From above characteristics it is clear that all the reactance curves have positive slope as all curves slope upward to the right side with increasing ω.

Here the curves are on the same side of the horizontal axis up to the point B, giving a stop band. For frequencies above point B, the curves are on opposite sides of the axis, giving pass band. Thus, point B gives cut-off frequency, represented as ω = ωc.

The algebraic approach to calculate cut-off frequency is as follows.

Above frequency comes out to be same as frequency calculated by reactance sketch method.

Variation of Z0T and Z0π with Frequency:

Consider expression for Z0T as

From equation (2) we can write,

Similarly we can write, 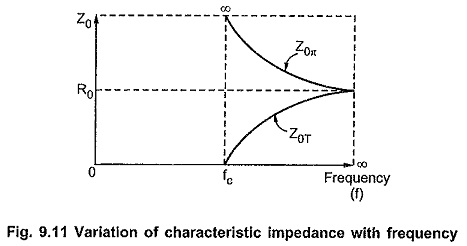 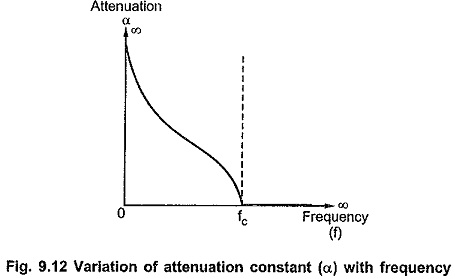 In stop band, phase constant β is always π radian. In pass band where α = 0, the phase angle β is given by

From the above equation it is clear that in pass band when frequency f increases from fc to ∞, β decreases to 0. The variation of phase constant β with frequency is as shown in the Fig. 9.13. 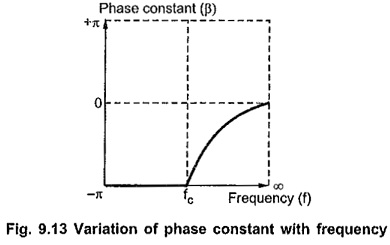 Dividing equation for R0 by fc, we get,

Multiplying equation for R0 and fc, we get,