The High Pass RC Circuit is shown in Fig. 29.1. The reactance of the capacitor is given as

i.e., Reactance XC of the circuit capacitor decreases with the increase in frequency. Thus at low frequencies the capacitor C offers considerable reactance and so blocks them, but at higher frequen­cies it offers little reactance and allows them to pass through it. The output voltage is developed across resistor R. 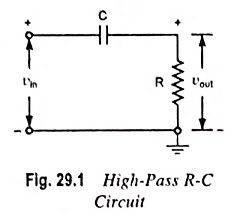 With the increase in fre­quency, the reactance of the capacitor decreases and, therefore, the output and gain increase. At very high frequencies, the capaci­tive reactance becomes very small, so the output becomes al­most equal to the input and gain becomes equal to unity. Since this circuit attenuates the low-frequency signals and allows trans­mission of high-frequency signals with little or no attenuation, it is called a High Pass RC Circuit.

Because of its blocking property for dc or low frequency input signals the capacitor acts like an open circuit and blocks the signal. This is the reason that the capacitor in the circuit is called the blocking capacitor. This circuit is widely employed as a coupling circuit to provide isolation between input and output.

Now response of the High Pass RC Circuit for different types of inputs will be found.

For a sinusoidal input the waveshape of the output will remain the same; the output will differ only in amplitude and phase an­gle depending on the frequency of the input signal. Here we are concerned only with amplification of the signal which is expressed as

The current through the circuit is given as

From above equation it is obvious that for a given circuit, the gain A depends upon the frequency of the input signal. 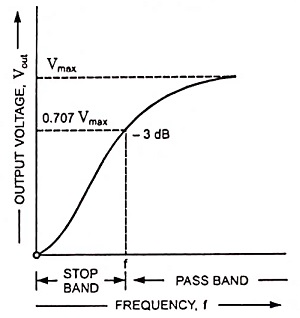 Now magnitude of A and phase angle θ are given as

So f1 is the frequency at which capacitive reac­tance is equal to the resist­ance of the circuit.

The maximum possi­ble value of gain (unity) is approached asymptoti­cally at high frequencies.

For a 10 per cent change in capacitor voltage, the time or pulse width involved is

The above equation applies when the tilt is 10 per cent or less. When the tilt exceeds 10%, the output voltage should be treated as exponential instead of linear and is given by an expression

where τ = RC, is called the time constant of the circuit.

As already discussed in Art. 28.6, a step voltage is zero for all times when t < 0 and maintains a voltage level, say V, for all times when t ≥ 0. The transition from voltage level 0 to V occurs at t = 0 and is instantaneous. Instant of time just before the tran­sition occurs is denoted by t = 0– and instant of time just after the transition has taken place is denoted by t = 0+. 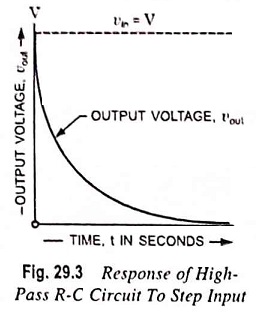 The rate at which the output voltage drops to zero exponentially depends upon the time constant RC of the circuit.

Since at any instant input voltage,

Taking Laplace of this

Taking inverse Laplace we have

where τ = Time constant of the circuit = RC

The voltage across a capacitor can change instantaneously only when an infinite current passes through it. 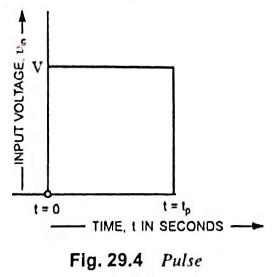 An ideal pulse voltage wave­form is given in Fig. 29.4. Here V is amplitude of pulse and tp is pulse duration or pulse width. 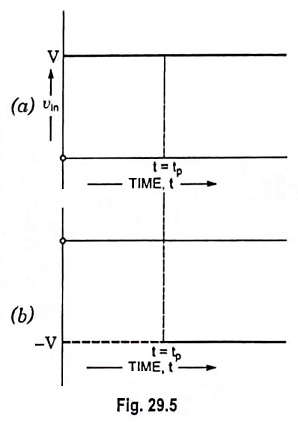 The above expression was derived in the previous subsection

At the input at, t=tp, there is a negative step of V and again this step will appear at the output

Since V > Ve-tp/CR at t = tp, vout is negative, as illustrated in 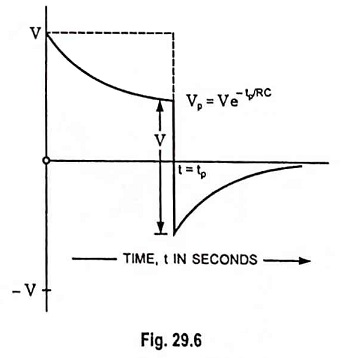 The rate of exponential fall or rise depends upon the time constant RC. The response for RC >> tp and for RC << tp is shown in Fig. 29.7 (a) and (b). If the time constant is very small, we get positive and negative spikes. The process of converting pulses into spikes is known as peaking. 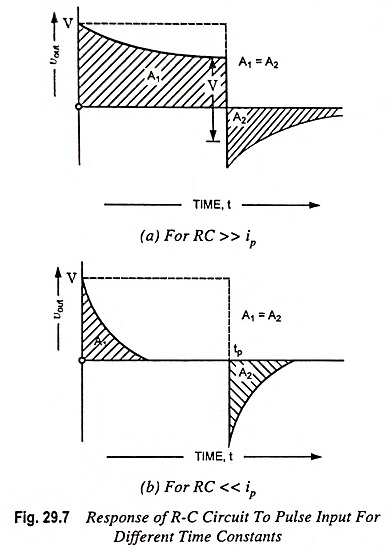 The areas A1  and A2 above and below the zero axis are equal which means dc component of output voltage is always zero.

In any case, for any value of RC, there must always be a tilt and an undershoot. The undershoot can be minimised by making RC very large in comparison to pulse width tp. However, the area below the zero axis will always be equal to the area above the axis A1 = A2. That is why output below zero axis rises to zero very slowly for RC >> tp.

For any periodic input waveform, the output is also a periodic waveform of same period and the average level of the steady state output signal is always zero and is independent of the dc level of the input. This is due to blocking property of the capacitor. This can be shown as below.

Multiplying by dt and then integrating over time period T, we have

Under steady-state conditions, the output waveform is repetitive with a period T so that

The above integral represents the area under the output wave­form over one cycle. It implies that the average level of a steady-state output signal is always zero. It shows that output must ex­tend in both the positive and negative directions of zero axis, so that the area above the axis must be equal to the area below the axis making resultant area equal to zero.

For square wave, output is same as for pulse input only the output in this case is repetitive with alternate positive and nega­tive amplitude. 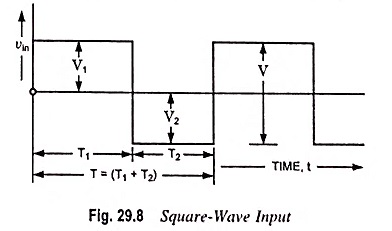 The shape of the output waveform in this case is going to depend upon the time constant RC. If RC/T1 and RC/T2 are both arbitrarily large in comparison with unity, the output will be iden­tical to the input waveform. On the other hand, if RC/T1 and RC/T2 are both very small as compared to unity, the output will consist of alternate positive and negative peaks with having peak-to-peak amplitude twice that of the input, as illustrated in Fig. 29.9 (b). 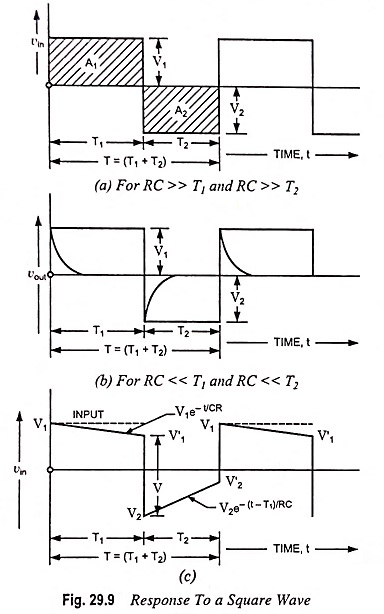 Analysis: For a constant voltage applied to the circuit shown in Fig. 29.1, output at any instant is given as

For a symmetrical square-wave

Substituting these values in above equations we have

Eliminating V′1 we have

The percentage tilt P is defined as

where f = 1/T is the frequency of the square-wave applied to the R-C circuit. 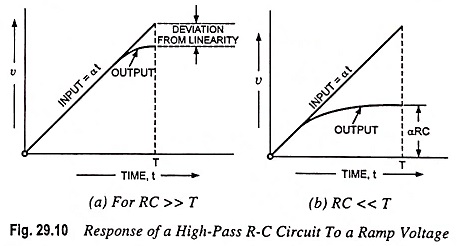 Since at any instant input voltage vin is equal to pd across resistor plus pd across the capacitor,

For times t which are very small in comparison with RC, we have

Figure 29.10 depicts the response of the High Pass RC Circuit for a ramp input when (a) RC >> T and (b) RC << T where T is the ramp duration. The output signal falls away slightly from the input, as depicted in Fig. 29.10 (a). As a measure of the departure from linearity, let us define the transmission error et as the difference between input and output divided by the input. The error at time t = T is then

where f1 = 1/2πRC is again the lower 3-dB frequency of the High Pass RC Circuit.

For large values of t in comparison with RC, the output approaches the constant value α RC as depicted in Fig. 29.10 (b). 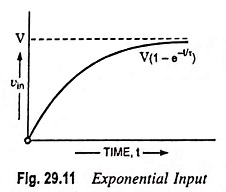 When an exponential input

Defining x and n by

the solution of Eq. (29.15), subjected to the condition that initially the voltage across the capacitor is zero, is given by the expression

If the time constant of the circuit is very high i.e., RC is much greater than τ(n >> 1), the second term of the Eq. (29.16) is negligible compared to the first term except for very small values of time. Then

The above equation agrees with the way the circuit should behave for an ideal step voltage. The response of the High Pass RC Circuit for different values of n is depicted in Fig. 29.12. 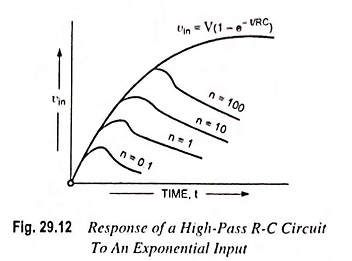