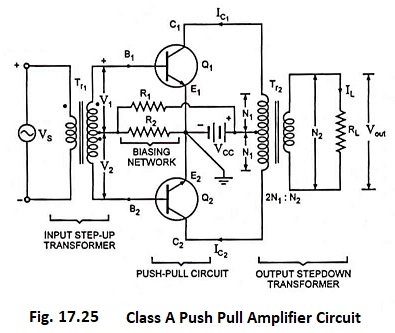 When the base current of one transistor is being driven positive with respect to the quiescent point Q, the collector current increases, thus causing a decrease in collector potential relative to ground. At the same time, however, a reverse action takes place in the base circuit of the second transistor, i.e., base current 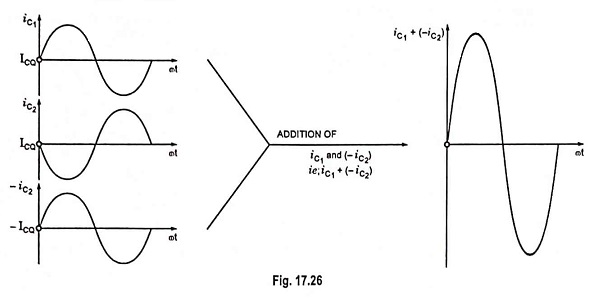 decreases causing a drop in the collector current with a consequent rise in collector potential w.r.t. ground. This means that the ac current flowing through the transformer primary winding is in the same direction. As iC1 increases (i.e., pulls), the current iC2 decreases (i.e., pushes). Hence the name push-pull amplifier. The overall operation results in ac voltage induced in the secondary of the output transformer and thus ac power is delivered to the load. The difference of two collector currents is illustrated in Fig. 17.26.

In view of the fact that the load current in the secondary of the output transformer is proportional to the difference of collector currents, it follows that the harmonic content will be less than it is in either of the collector currents because of cancellation effects. Thus the push-pull arrangement yields much less distortion in the output. This is illustrated below.

Their collector currents are expressed as

The output voltage induced in the output transformer secondary, being proportional to (iC1 – iC2),

From the above equation for output voltage vout it is obvious that all even harmonics are eliminated. This conclusion was reached on the assumption that the two transistors are identical. If their characteristics differ appreciably, the appearance of even harmonics is not ruled out.

The drawbacks of Class A Push Pull Amplifier are