Step up Chopper – Definition, Circuit Diagram and its Working Principle: 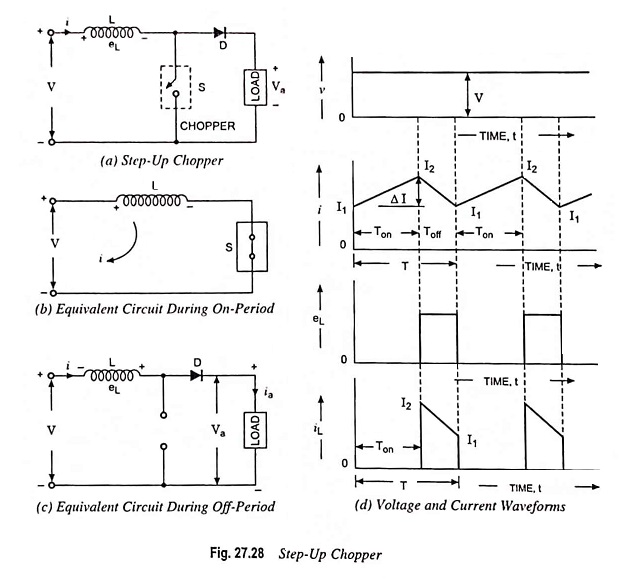 Assuming negligible voltage drop across diode D, the voltage equation for outer loop may be written as

If the rate of fall of current through inductor is di/dt, Eq. (27.39) may be written as

It means that the inductor voltage adds to the source voltage to force the inductor current into the load. In this manner, the energy stored in inductor is released to load. Here, higher value of inductance L is preferred for getting lesser ripple in the output.

During the time Ton, when when the chopper is on, the energy stored in the inductor is given by

Above Eq. (27.41) is based on the assumption that the variation of output current is linear.

During the period Ton, the current through the inductor rises to peak value I2 while during off period Toff it falls to value I1 and rises again to I2 in the next on state of the chopper. It is shown in Fig. 27.28 (d). Thus, in a cycle the average value of current is given by Ia = I1 + I2/2. Hence the energy stored in the inductor L is given by

and this energy is released by the inductor to the load during the off-period, Toff . Thus energy released by inductor L during off period is given by

Assuming the system to be lossless, in the steady-state the two energies will be equal i.e.,

The step up chopper can be employed for regenerative braking of dc motors even at low operating speeds. Let V represent the motor armature voltage and Va the dc source voltage in Fig. 27.28 (a) .