Texas instruments introduced transistor transistor logic (TTL), a widely used family of digital devices in 1964. It is fast, inexpensive and easy to use. Transistor Transistor Logic family consists of variety of SSI and MSI chips, with the help of that all kinds of digital circuits and systems can be built up.

The basic Transistor Transistor Logic circuit is the NAND gate. The circuit diagram is shown in Fig. 47.3. 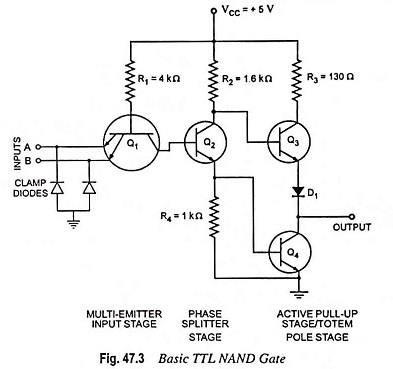 Protecting diodes connected in multiple-emitter transistor protect the transistor from damage due to excessive input voltages.

Consider the other case also, when both inputs or either is low, then base of Q1 becomes approximately at 0.7 V which reduces the base voltage of Q2 at almost zero volt, therefore, transistor Q2 is cut off. Almost no current flows through resistances R2 and R4 and, therefore, base voltage of Q4 becomes zero and Q4 is cut off. Base voltage of Q3 becomes high and since Q3 acts as an emitter follower, it produces high output.

The function of diode D1 is to prevent even the slight conduction of Q3, when the output is low. Voltage drop across the diode D1 keeps the emitter diode of Q3 reverse biased and so only Q4 conducts during the low output condition.

The fan-out in TTL totem-pole circuit is limited by the amount of current that the output transistor can sink in LOW state or can source in HIGH state.

Function table for the two-input Transistor Transistor Logic NAND gate is given in Table 47.1. 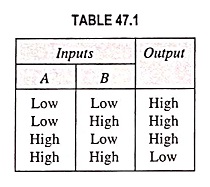