In Vertical PNP transistor, the p type substrate is used as p-type collector while the n-epitaxial layer is used as base. Obviously the next diffusion layer of p-type is used as an emitter. This type of PNP is called as Substrate PNP Transistor. The main drawback is that collector has to be held at a fixed negative potential. 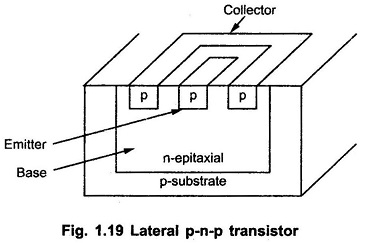