The impurity or dopant can be added into silicon by using one of the most commonly used methods given below,

The Diffusion Process in IC Fabrication is carried out at high temperature (about 900°C to 1250°C). The wafer placed in a chamber is exposed to the diffusant containing required impurity. In the chamber the wafer is placed in a quartz boat positioned in a quartz diffusion tube. The quartz tube holds a stack of vertically mounted wafers which all are diffused simultaneously. The equipment used for the oxidation process is used for the Diffusion Process in IC Fabrication. The diffusivities of the dopants in oxide and silicon decide the imperviousness of silicon dioxide to the diffusant.

The dopant may be in solid, liquid or gaseous form. The standard preferred p dopant is boron, while n dopants are antimony, arsenic, phosphorus. Arsenic is also preferred for n+ type source-drain and emitter diffusions. With dopants in solid state, the carrier gas, either nitrogen or oxygen, flows over a quartz boat containing dopant in powder form. With a liquid state dopant, the gas is bubbled over a liquid source in heated bath. With gaseous state dopant, there are problems of toxicity and chemical stability.

Diffusion Process in IC Fabrication takes place in one of the two modes,

1. Models of Diffusion in Solids:

The study of diffusion is based on two major approaches;

The main objective of the study of the diffusion is to develop the models from experimental data. The main usefulness of this study is to calculate the important electrical characteristics of the semiconductor devices.

Diffusion, the atomic movement, in the solid can be realised as an atomic movement of diffusant in the crystal lattice by vacancies or self-interstitials. The common atomic diffusion models in a solid as shown in the Fig. 1.13. An atom smaller than host atom can not form covalent bonds with silicon. Such atom moves interstitially. ‘The movement of such interstitial atom from one place to other is called interstitial diffusion mechanism.

The interstitialcy mechanism is as shown in the Fig. 1.14. 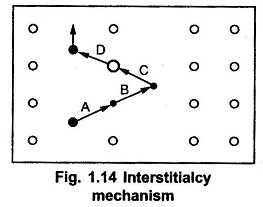 Following Table 1.4 indicates which mechanisms are dominant for different dopants.

To prevent diffusion of the impurity atoms into the silicon, the thermal oxide of silicon is most widely used as a mask in almost all the VLSI and silicon planar device fabrication.

In general, group III and group V elements form a glass in SiO2. Thus the melting temperature of the oxide film reduces. The diffusitives of the elements from group III and V depend on the concentration of the elements. A phosphorus forms a thin viscous film on SiO2. At 800°C to 900°C, the film flows. But outside the liquid solid boundary, because of low concentration, phosphorus can not show any diffusion.

The diffusivities of the dopant impurities, such as B, As, P and Sb, are very low, when their concentrations are very low. But some of the elements such as hydrogen, He, OH, Na, O2 and Ga are fast diffusants in SiO2 at around 900°C.

Some metal elements such as Ag, Cu, Au, Pd and Ti, can diffuse in SiO2 under an electric field. This method is used in MOS structures to check reliability of the gate oxide. Au and Pd show no diffusion under applied field of ± 106 V/cm for 150 to 600°C temperature. While Ag diffuses with N2 at 300°C under electric field of 105 V / cm. Above 1100°C, under an applied electric field, sodium and potassium diffuses in SiO2 rapidly.

Because of presence of defects and the high concentration effects, the diffusion study becomes complicated. Under the oxidizing ambient condition, the diffusion enhances or retards in silicon. The other process parameters also affect the lateral enhancement of diffusivity. All these conditions affect VLSI structures.

3.1 Effect of An Oxidizing Ambient:

When the diffusions of common impurity atoms (boron, phosphorus, arsenic and antimony) were tested in oxidising ambient under similar conditions. The oxidation enhanced diffusion of boron was first observed for <100> and <111> oriented silicon for high concentrations. Then the efforts were taken to study the diffusion separating the high concentration effects by introducing dopants at low concentrations. Thus ion implanted layer was formed. A thin layer of oxide was grown at low temperatures followed by relatively thick layer of silicon nitride. It was observed that the thin oxide layer is useful in adjusting the interface properties. Without this layer, surface leakage currents caused instabilities. Then using photolithography and etching techniques strips of silicon nitride and silicon were removed. Then it was observed that under oxidising ambient conditions, these samples oxidised at different oxidation temperatures for different time periods for <100> and <111> oriented silicon wafers.

The enhancement and retardation in diffusion can be calculated by measuring the junction depths from the original sample surface prior to oxidation, but before the deposition of silicon nitride layer. The diffusivity under oxide is given by

Similarly the enhancement and retardation depth Δ xj is given by

The oxidation enhancement of As and P is studied using prediffused samples. Following are the results of the above mentioned investigations.