The Basic Planar Process in IC Fabrication are as listed below.

Let us study each process in detail one by one.

In this Basic Planar Process in IC Fabrication following subprocesses, are involved – 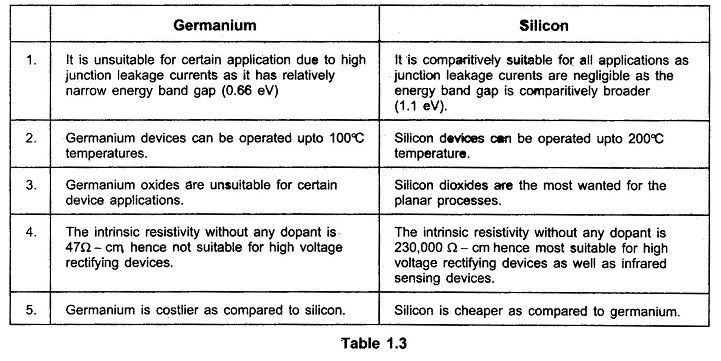 The starting material for the crystal growth is highly purified polycrystalline silicon called as Electronic – Grade Silicon (EGS). To obtain this purest form of silicon, first metallurgical grade silicon (MGS) is produced in a submerged electron arc furnace. Using this step, MGS is solidified with a purity of about 98%. Then the silicon is pulverized mechanically. Then it is added with unhydrous hydrogen chloride to form trichlorosilane (SiHC13). This Basic Planar Process in IC Fabrication is carried out with a catalyst in a fluidized bed at 350°C. After this reaction, the trichlorosilane obtained is liquid at room temperature. Then by using fractional distillation, purification of trichlorosilane is carried out. After this purified trichlorosilane is applied with chemical vapour deposition process. With the help of chemical reaction, hydrogen is reduced from trichlorosilane. It results in the rods of silicon. This multistep process continues for many hours and finally results in polycrystalline structured EGS rods with 0.2 m diameter and several meter length. This process is advantageous because the costing of the process is low and the byproducts of the reactions are less harmful.

The furnace consists a crucible, crucible support, rotation mechanism and heating element housed in a chamber. The crucible is made up of fused silica (SiO2) as this material is chemically unreactive with molten silicon. An EGS block is heated in a fused silica crucible with the appropriate dopant using a heating element. The material in the crucible is heated to a temperature which is greater than the melting point of silicon, i.e. 1417°C. A resistance heating is preferred for large pullers ; while induction heating is used for small melt sizes.

In general, the diameter is controlled by the pull rate. The standard diameter of the ingot is about 150 mm and the length is about 2m. The ingot with such dimensions weighs about 60 kg.

The silicon growth is generally conducted in a vacuum or in an inert gas like helium or argon.

To control the process parameters such as temperature, crystal diameter, pull rate and rotation speed etc, control system is used which works under either open loop control or closed loop control.

First of all, the seed which initiated the crystal growth is separated from the circular ingot. The top and bottom ends are also cut off. As silicon is hard and brittle material, industrial grade diamond is used for shaping and cutting it. After completion of the crystal growth, it is generally tested for resistivity and perfection evaluation. So the portions of the ingot failed in the above tests are also cut. Note that these cuttings can be recycled for new crystal growth after cleaning.

After grinding the ingot to a precise diameter, generally two flats are ground along the length of the ingot. The larger flat is called major or primary flat and it is positioned relative to the crystal direction. The x-ray technique is used to locate the primary flat. The primary flat is very important as

The smaller flat is called secondary flat which is used to identify the orientation (< 100 > or < 111 >) and conductivity (p or n) of the wafer.

Once the flats have been ground, the ingot is sliced into wafers. This process is very important because it is necessary to maintain the flat plane and desired surface orientations. 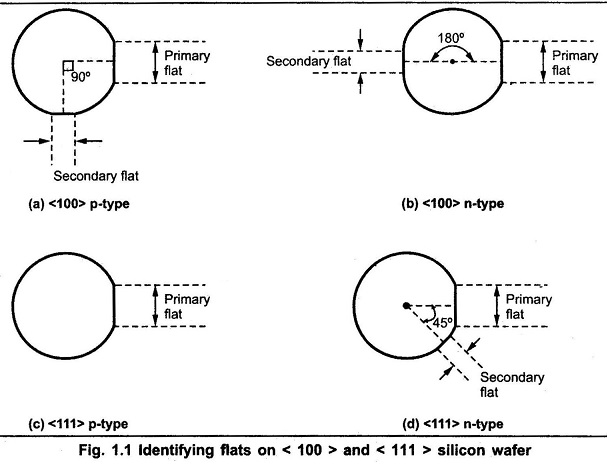 The ingot is sliced using a circular cutting blade kept in tension on the outer edge while having the cutting edge on the inner diameter.

The thickness of the wafer is determined by the slicing. It is another important wafer parameter because thicker wafers can easily withstand the stresses of subsequent thermal processes. The higher quality of slicing is achieved by using capacitive sensing device near the blade which helps the blade to be positioned correctly to achieve exactly flat plane cut.

If the sliced wafers are to be used for VLSI application, then before etching process two sided mechanical lapping process is carried out. Using this process, wafers with uniform flatness are achieved which are mostly required for photolithography.

Due to the machining operations during trimming, grinding and slicing, the surface and edges of the wafers get contaminated and even damaged. The depth of damage depends on the mechanical operations carried previously. It is observed that the damaged and contaminated regions are not more than 10 μm deep. Even by using chemical etching process, all the damaged and contaminated edges can be removed. Practically mixture of hydrofluoric, acetic and nitric acids is used in chemical etching. This is called acidic etching. The other alternative is to use alkaline etching using potassium hydroxide or sodium hydroxide. By the etching process, typically 10 μm to 30 μm of wafer is removed from both the sides.

After etching, the wafer is polished to eliminate the microcracks and debris. The main intension of polishing a wafer is to provide a smooth and perfect flat surface such that the device features can be engraved. The polishing is done with the help of a polishing machine. Note that the polishing process removes further 10 μm to 30 μm of the wafer surface typically.

The three steps of lapping, etching and polishing reduce the wafer thickness by 40 to 150 μm. Thus by considering the typical figures, to have the wafer of 200 μm thickness, the thickness of the substrate required is 560 μm, In practice, the processed 6 inch wafers are typically 250 μm to 500 μm thick.

After cleaning process, the wafer is ready for the formation of the dies.

The epitaxy means ‘arranged upon’. In epitaxy a monocrystalline film is formed on the top of a monocrystalline surface. Thus epitaxy is crystalline growth process in which the foundation layer i.e. substrate works as seed crystal. The epitaxial layer formed on the substrate may be either n-doped, p-doped or intrinsic. The polarity and the concentration of the dopant to be used is not determined by the foundation layer. In general for p-type doping bi-borane (B2H6) and for n-type doping phosphine (PH3) are used with the steam of silicon tetrachloride hydrogen gas.

There are two types of epitaxy as given below.

While studying epitaxy one must note that this process is not restricted to a single layer formation on the substrate. But multiple epitaxial layers are also possible which are widely found in various applications such as microwave p-i-n diodes.

In general bipolar integrated circuits use epitaxial layer process in which high resistivity epitaxial layer is formed over a low resistivity substrate. To provide isolation between the epitaxial growth and the substrate, the doping used in both layers is of opposite type. Due to this a heavily doped buried layer is formed. The buried layer is also called diffusion layer as shown in the Fig. 1.2.

The advantages of epitaxy are

The two main epitaxial processes are