The circuit for base modulation is shown in Fig. 22.28. The carrier signal from a crystal oscillator is coupled to the base terminal of the amplifier through transformer T1. The modulating signal is applied across resistor R1 through capacitor C1. The capacitor C1 allows only audio frequency ac signal to pass through and blocks the dc components. The modulating signal develops a voltage across R1, which, in turn, alters the quiescent point in the base circuit. With the increase in bias current, the signal at the collector terminal is correspondingly strengthened. 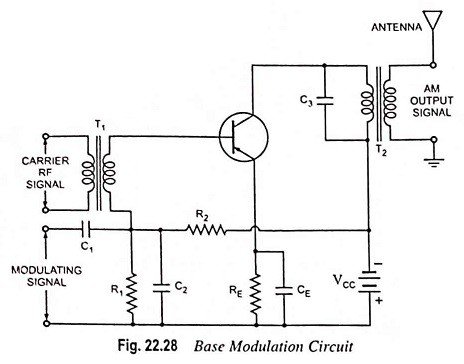 Similarly, as the bias current falls during the reverse part of the cycle of the modulating signal, the output at the collector terminal is also reduced. Consequently, a plot of the collector output will be found to give a variation similar to that shown in Fig. 22.18. 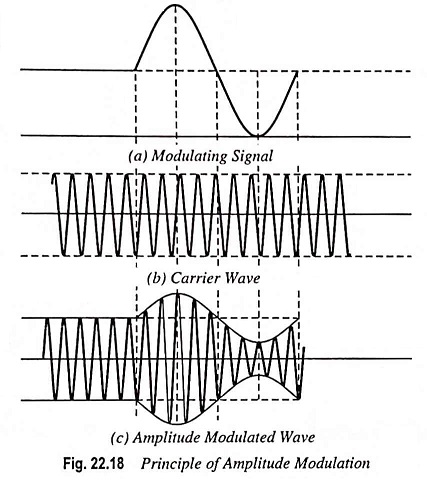 The resistor RE is the self-bias emitter resistor and CE is its bypass capacitor. Also, R2 is a dropping resistor which limits the dc voltage drop across R1, which, in turn, establishes the initial quiescent base current. Capacitor C2 is a bypass capacitor for the carrier signal in the input circuit. In understanding the operation of this circuit it is helpful to keep in mind the fact that ωm is very small in comparison to ωc.

Special Features of Base Modulation:

Base modulation is used in TV transmission because it needs little power and can meet the power need of large bandwidth.