Base load and Peak Load on Power Station:

1.Base load. The unvarying load which occurs almost the whole day on the station is known as base load.

Referring to the load curve of Fig. 3.13, it is clear that 20 MW of load has to be supplied by the station at all times of day and night i.e. throughout 24 hours. Therefore, 20 MW is the base load of the station. As base load on the station is almost of constant nature, therefore, it can be suitably supplied without facing the problems of variable load.

2.Peak load. The various peak demands of load over and above the base load of the station is known as peak load.

Referring to the load curve of Fig. 3.13, it is clear that there are peak demands of load excluding base load. These peak demands of the station generally form a small part of the total load and may occur throughout the day. 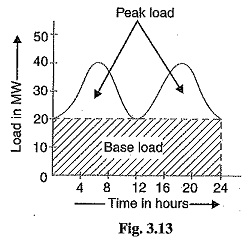 Method of Meeting the Load:

Illustration. The interconnection of steam and hydro plants is a beautiful illustration to meet the load, When water is available in sufficient quantity as in summer and rainy season, the hydroelectric plant is used to carry the base load and the steam plant supplies the peak load as shown in Fig 3.14 (i).

However, when the water is not available in sufficient quantity as in winter, the steam plant carries the base load, whereas the hydro-electric plant canes the peak load as shown in Fig. 3.14 (ii). 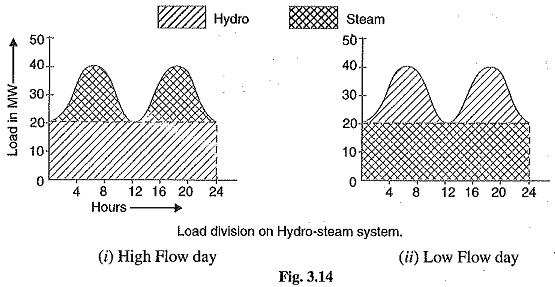 The connection of several generating stations in parallel is known as interconnected grid system.

The various problems facing the power engineers are considerably reduced by interconnecting different power stations in parallel. Although interconnection of station involves extra cost, yet considering the benefits derived from such an arrangement, it is gaining much favor these days. Some of the advantages of interconnected system are listed below :