The Common Base Circuit Diagram (CB) shown in Fig. 6-34 is very similar to a CE circuit, except that the input signal is applied to the transistor emitter terminal (via C2), instead of the base. Also, there is no bypass capacitor across the RE, but the base terminal is ac grounded via capacitor C1. Because the base is ac grounded, all of the signal voltage is developed across the transistor base-emitter Junction. As for a CE circuit, the output voltage is developed across the collector resistor (RC).

The CB ac equivalent circuit is drawn, as always, by replacing the supply voltage and capacitors with short circuits. This gives the circuit in Fig. 6-36(a), which shows that the transistor base terminal (grounded via capacitor C1) is common to both input and output. Hence the name common base. 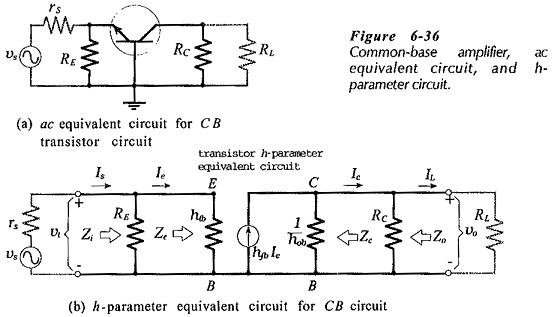 Referring to Fig. 6-36(b), the input impedance to the transistor emitter is simply hib.

Typically hib is around 21 Ω for a low-current transistor. (Also, hib ≈ r′e,) Resistor RE is in parallel with Ze, so the circuit input impedance is,

RE is usually much larger than Ze, so Zi ≈ Ze.

‘Looking into’ the collector-base terminals of the CB h-parameter circuit in Fig. 6-36(b), a very large resistance (1/hob) is seen.

Because Zc is normally much larger than RC,Zo ≈ RC.

As in the case of a CE circuit, the output impedance of a Common Base Circuit Diagram can be determined by just reading the resistance of RC.

The input voltage equation for the circuit in Fig. 6-36(b) is,

and the output voltage is,

Effect of Unbypassed Base Resistors:

If capacitor C1 is not present in the CB circuit in Fig. 6-34, the transistor base is not ac short-circuited to ground So a resistance (RB = R1||R2) must be shown in the ac equivalent circuit [Fig. 6­-37(a)], and in the h-parameter circuit [Fig. 6-37(b)]. The presence of the unbypassed base resistors can substantially affect the transistor input impedance and the circuit voltage gain. Analysis of the h-parameter circuit shows that, 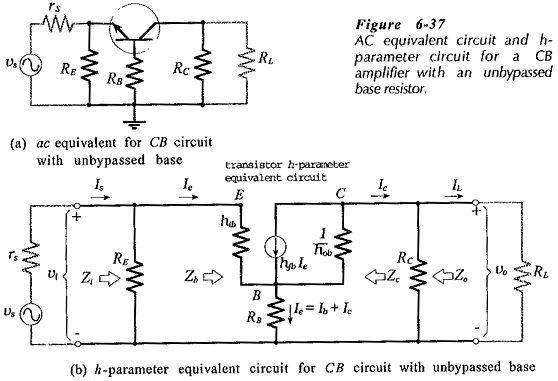 With the base bypassed to ground: 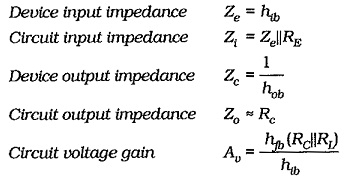 A Common Base Circuit Diagram has good voltage gain and relatively high output impedance, like a CE circuit. Unlike a CE circuit, a CB circuit has a very low input impedance, and this makes it unsuitable for most voltage amplifier applications. It is normally employed only as a high-frequency amplifier. The transistor base terminal in a CB circuit should always be bypassed to ground When this is not done, the input impedance is increased and the voltage amplification is substantially reduced.