In case of Single Phase Full Wave Controlled Rectifier (or Converter) both positive and negative halves of ac supply are used and, therefore, the effective value of dc voltage is high and ripple content is less compared to half-wave rectifiers. There are two basic configurations of Single Phase Full Wave Controlled Rectifier. Their classification is based on the type of configuration used i.e., mid-point converters and bridge converters. The diodes used in full-wave rectifiers, may be partially or completely replaced by thyristors.

In a Single Phase Full Wave Controlled Rectifier circuit with mid­point configuration two thyristors and a single phase transformer with centre-tapped secondary windings are used. These converters are sometimes called the two pulse converters because two triggering pulses or two sets of triggering pulses are to be produced during every cycle of the supply to trigger the different thyristors. Such circuits are generally used for low rating outputs.

1. With Resistive Load: The circuit of a mid-point converter with resistive load is shown in Fig. 27.7. In this circuit, two thyristors are connected to the centre-tapped secondary of a transformer, as depicted in Fig. 27.7. The input signal is coupled through the transformer to the centre-tapped secondary. The circuit operation is explained below. 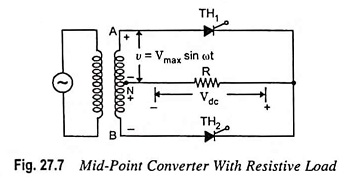 When terminal A shown in the circuit is positive w.r.t. mid­point N of the transformer secondary, point B will have negative polarity w.r.t. mid-point. Under this condition the thyristor TH1 conducts when it is fired at an angle α. The current through and voltage across the load are shown by the waveforms in Fig. 27.8. The current continues to flow up to angle π radians or 180° when the supply voltage reverses its polarity and thyristor TH1 gets turned off by natural commutation. During the negative half cycle of ac supply, the terminal B of the transformer secondary is positive w.r.t. to mid-point N. Thyristor TH2 gets turned on when it is gated. Usually the firing angles for the two thyristors are taken to be equal so as to avoid unequal distribution of load current in the two halves of input cycle. 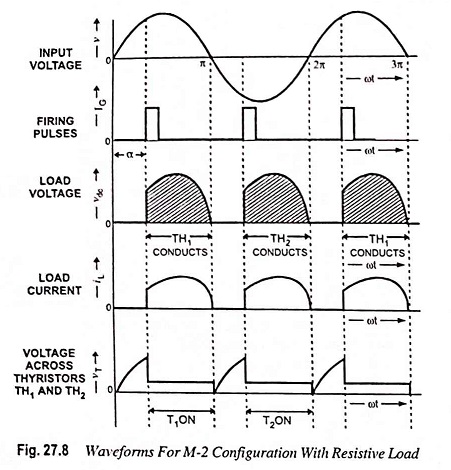 The voltage and current relations are derived as follows.

The output dc voltage across the resistive load is given by

Average load current is given by

RMS value of load current is given by

2. With Inductive Load: The effect of inductive load in case of mid-point converter is same as in case of half-wave con­verter, discussed earlier. The circuit of a mid-point converter using inductive load is shown in Fig. 27.9 and associated wave­forms are shown in Fig. 27.10. In positive half cycle thyristor TH1 conducts when it is fired at an angle α. When ωt = π the cycle reverses and the voltage at terminal A goes negative while at terminal B it goes positive. At this value of angle thyristor TH1 still conducts due to current circulated as a result of decay of energy stored in the inductor. The rate of decay is determined by L/R ratio. When the energy stored in the inductor falls to zero, thyristor TH1 is turned off and the load current falls to zero value at an angle called extinc­tion angle β. The extinc­tion angle β may be greater than, equal to, or less than the firing angle α depending upon whether the value of in­ductance is more than, equal to or less than the critical value respectively. In case the extinction angle β is more than the firing angle α, the device is said to be in continuous conducting mode and when both angles α and β have the same value, the mode is called just continuous conduction mode. The waveforms depicted in Fig. 27.10 are for just conduction mode i.e. β = α. In case of discontinuous conduction mode extinction angle β has a value lesser than that of firing angle α. 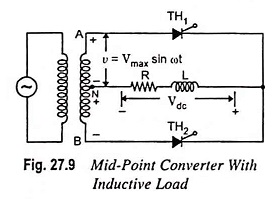 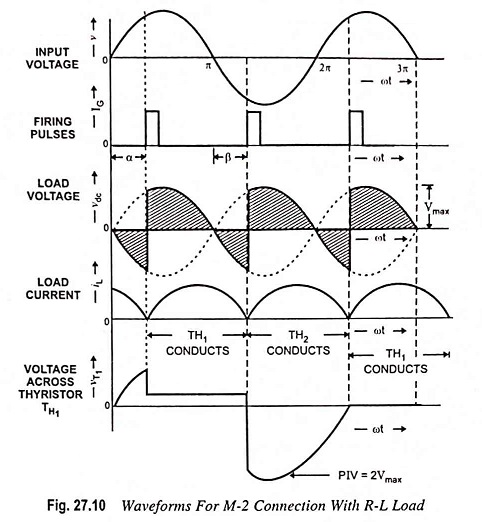 The output dc voltage across the inductive load is given by

Some conclusions may be made from above equation:

3. Effect of Freewheeling Diode: Circuit shown in Fig. 27.9 can be modified by using a freewheeling diode as depicted in Fig. 27.11. The operating principle of the rectifier is the same as that of without freewheeling diode except the fact that during the negative cycle, the load voltage becomes zero. The function of freewheeling diode is to divert the load current from the supply to the diode. The net result is that the magnitude of the net magnetizing current in the transformer secondary is reduced i.e., Idc sin Φ goes down. 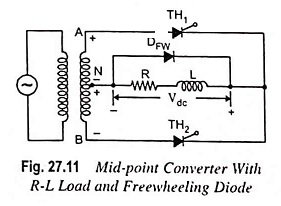 As Idc is the load current and remains constant, only sin Φ decreases. It means that angle Φ decreases which leads to an increase in power factor. Thus, the use of freewheeling diode improves the power factor of the load. The presence of freewheeling diode results in change in waveforms. As the supply voltage reverses, the load voltage is reduced to zero as it is shorted by the diode conducting the current circulated by the energy stored in the inductor. From the waveforms shown in Fig. 27.12, it can be observed that switching behavior of thyristor in case of R-L load is like that in a pure resistive load. 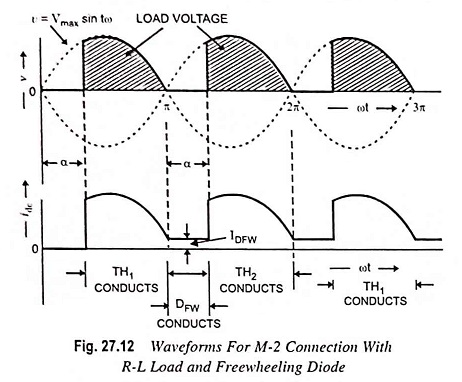 The average dc output voltage is given by

The dc load current is given by

A single phase bridge converter needs 4 thyristors. This configuration leads to two quadrant operation. Such a converter is called the two-quadrant converter or fully controlled converter. Many times the bridge circuit is modified by replacing two thyristors by two diodes. This configuration leads to one quadrant operation (operation is restricted to first quadrant). Such a converter is called the one-quadrant converter or a semiconverter.

The load on the converter may be purely resistive, inductive (R-L) load or R-L-E load. An R-L-E load consists of resistance, inductance and motor (E stands for back emf of motor). The load may also have a battery (emf E) instead of motor. 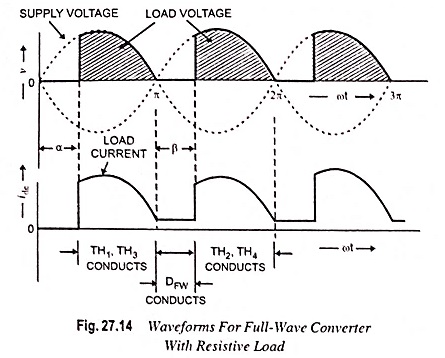 2. With Inductive Load: Figure 27.15 shows a single phase fully controlled bridge rectifier (or full converter) with R-L load. The fully controlled bridge rectifier provides two pulses in each cycle as in case of mid-point full-wave converter. The operating principle and waveforms of this circuit are similar to those obtained for mid-point full-wave converter. Firing angles for both the thyristor pairs are assumed to be equal. A large value of L will result in a continuous steady current in the load. A small value of L will produce a discontinuous load current for large firing angles. The waveforms with two different firing angles are depicted in Fig. 27.16. 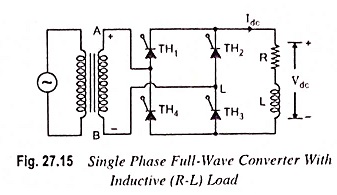 The voltage waveform at the dc terminals comprises a steady dc component superimposed with an ac ripple component, having a fundamental frequency equal to twice that of ac supply. 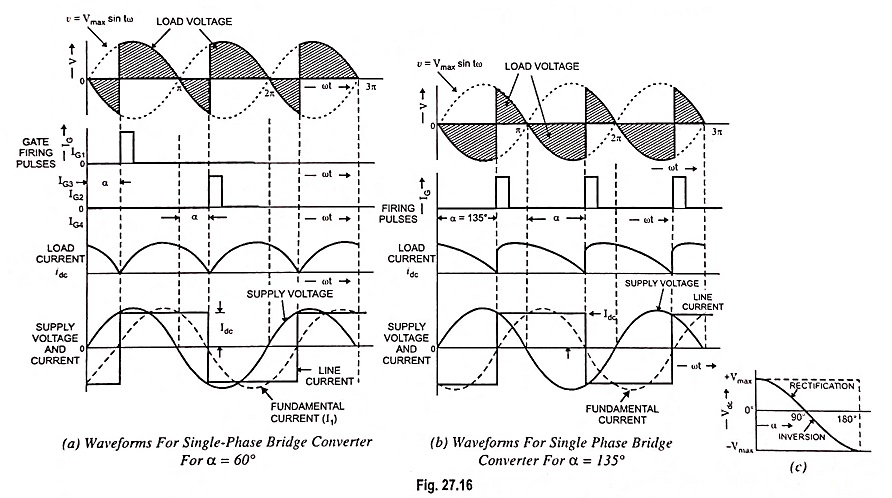 As illustrated in Fig. 27.16 (a), at firing angle α = 60°, thyristors TH1 and TH3 are triggered. Supply voltage from this instant appears across the output terminals and forces the current through the load. The load current Idc is assumed to be constant. This current also flows through the supply and the direction is from line to neutral, which is taken positive as depicted in Fig. 27.16 (a) along with the applied voltage. At instant π, the supply voltage reverses but because of very large inductance L, the current keeps flowing in the same direction at constant magnitude Idc. Thus the thyristors TH1 and TH3 remain in conducting state and therefore, the negative supply voltage appears across the output terminals. At an angle π + α, thyristors TH2 and TH4 are triggered. With this, negative supply voltage reverse biases thyristor TH1 through thyristor TH2 and thyristor TH3 through thyristor TH4 of commutating thyristor TH1 and TH3. The current continues flowing in every half cycle and output voltage is obtained as depicted in the figure. As illustrated the current is positive when TH1 and TH3 are conducting and negative when TH2 and TH4 are conducting.

The average output dc voltage is given by

The average value of output dc voltage can be varied, by varying firing angle α, continuously from positive maximum to negative maximum, assuming continuous current flow at the dc terminals. Because the average dc voltage is reversible even though the current flow in the load is unidirectional, the power flow in the convener can be in either direction. Thus full converter provides two modes of operation.

(a) Rectification Mode: For firing angle α less than 90°, the input ac supply is rectified by the circuit. The average value of voltage at the dc terminals is positive in the range from 0° to 90°, as illustrated in Fig. 27.16 (c) . In this mode, the power is transferred from the source to the load.

(b) Inversion Mode: For firing angle between 90° and 180°, the load voltage is negative which means that the power is supplied from the load to the source. Waveforms for α = 135° are shown in Fig. 27.16 (b) . Such an operation is used in the regenerative braking mode of dc drives and in high voltage direct current (HVDC) transmission.

If the load is highly inductive, then time constant L/R is very high and the output current Idc remains constant.

The value of α should be such that when thyristors are triggered the instantaneous value of ac input voltage Vmax sin ωt is more than emf E. This sets a lower limit on firing angle α. The average output voltage of the converter is obtained from Eq. (27.20).

For continuous load current, we may write

During the period from α to π, the input voltage and input current are positive, and the power flows from the supply to the load. The converter is said to be operating in rectification mode. During the period from π to π + α, the input voltage is negative but the input current is positive and reverse power flows from the load to the supply. But the net power flow is from ac source to dc load because (π – α) > α [Fig. 27.17 (c)]

This converter is extensively used in industrial applications up to 15 kW.

When one pair of thyristors is replaced by diodes in a single phase fully controlled bridge circuit, the resultant circuit obtained is called the half-controlled bridge rectifier or semiconverter. With this type of circuit, it is possible to provide a continuous control of the mean dc voltage, from maximum to virtually zero, but reversal of the mean output voltage is not possible. Thus, only a one-quadrant operation can be obtained from this circuit.

An R-L-E load supplied from single phase ac supply mains through a semi-controlled rectifier is shown in Fig. 27.18 (a). The circuit has two thyristors TH1 and TH2 and two diodes D1 and D2. The freewheeling diode DFW helps in conduction of current when thyristor is not conducting.

Average output voltage of semiconverter is given as

Average load current is given as 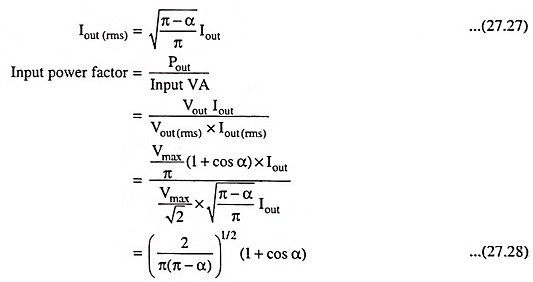 Phase controlled converters have poor power factor especially when the output voltage is less than the maximum, i.e., when tiring angle α is large. Semiconverters provide better power factor in comparison to full converters even though the improvement is marginal.