The circuit of a balanced slope detector is shown in Fig. 22.53 (a). This circuit employees two slope detectors connected back to back to the opposite ends of a centre tapped secondary of the transformer. Thus voltages supplied to the two sides are in phase opposition. 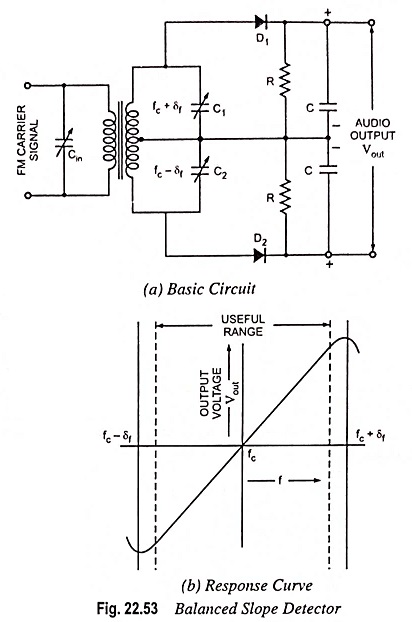 The upper secondary parallel resonant circuit is tuned to frequency fc + δf, where fc is the centre carrier frequency and δf is the deviation in FM receivers (75 kHz to 100 kHz). The lower secondary parallel circuit is tuned to frequency fc – δf. Each circuit is connected to a diode detector with an R-C load. The output is connected across the series combination of the two R-C loads. Thus the total output is equal to the sum of the individual outputs.

This FM detector is considerably more efficient than only slope detector and gives more linear response over the useful frequency range. However, it is difficult to align as it involves three resonant circuits tuned to three different frequencies. Further amplitude limiting is not provided.