A multivibrator is basically a two stage R-C coupled amplifier with positive feedback from the output of one amplifier to the input of the other, as illustrated in Fig. 31.16. Multivibrator is a switching circuit and may be defined as an electronic circuit that generates nonsinusoidal waves such as rectangular waves, sawtooth waves, square waves etc. Multivibrators are capable of storing binary numbers, counting pulses, synchronizing arithmetic operations and performing other essential functions used in digital systems.

Ordinarily square waves can be generated by introducing a switch in a dc circuit, as shown in Fig. 31.17 (a). Square wave will be generated by turning the switch on and off at regular intervals. Hence a multivibrator is essentially a switching circuit. 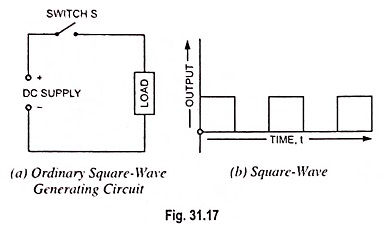 The circuit operates in two states viz. on and off controlled by circuit condition. The operation of the circuit is such that when one amplifier is cut off (off) the positive feedback loop maintains the other amplifier in a conducting or on state. When a trigger causes one amplifier to change state, the coupling network acts to change the state of the second amplifier. The outputs are opposite in sense, one indicating a transition from an “off” state to an on state and the other the opposite transition. The condition in which the multivibrator may remain indefinitely until the circuit is triggered by some external signal is termed as the stable state.

There are only two possible states of a multivibrator and are as follows:

First state : Transistor Q1 on and transistor Q2 off.

Depending upon the type of coupling network employed, the multivibrators are classified into the following three categories.

The first one is the non-driven type whereas the other two are the driven type (also called the triggered oscillators).

1. Astable or Free running Multivibrator: In an astable multivibrator, both coupling networks provide ac coupling through coupling capacitors. Each amplifier stage provides phase shift of 180° in the midband so as to provide an overall phase shift of 360° or 0° and thus a positive feedback. The circuit, therefore, oscillates, provided that the total loop gain is equal to or greater than unity. It has no stable state. The two states of operation of astable multivibrator are quasi stable (temporary) states. The astable multivibrator, therefore, makes successive transitions from one quasi state to the other one after a predetermined time interval, without the aid of an external triggering signal. The periodic time depends upon circuit time constants and parameters. Thus it is just an oscillator as it does not need any external pulse for its operation. Since its output oscillates in between off and on states freely, it is called a free running multivibrator. It is also named as square-wave generator based on its application. AMV may also be used as a synchronised oscillator and for driving sweep generators.

2. Monostable or Single-Shot Multivibrator: It is also called a single swing, or delay multivibrator. In this circuit, one coupling network provides ac coupling while the other provides dc coupling. It has only one stable (standby) state and one quasi stable state. In this circuit, a triggering signal is required to induce a transition from stable to quasi stable state. The circuit remains in the quasi stable state for a period determined by the circuit components. After this period, the circuit returns to its initial stable state and no external signal is required to induce this reverse transition. Thus, the monostable multivibrator supplies a single output pulse of a desired time duration for every input trigger pulse.

3. Bistable or Flip-Flop Multivibrator: The bistable multivibrator, also called a two-shot multivibrator, requires application of two triggers to return the circuit to its original state. The first trigger causes the conducting transistor to be cutoff, and the second trigger causes a transition back to the conducting state. Because two triggers are required, bistable circuits are sometimes called flip-flops. Obviously, such a circuit does not oscillate. In this circuit, both coupling networks provide dc coupling and no energy storage element is used.

A bistable multivibrator is employed for performing many digital operations such as counting and storing of binary informations. This circuit also finds extensive use in the generation and processing of pulse type waveforms.

Input-output relations for the three types of multivibrators are shown in Fig. 31.18. 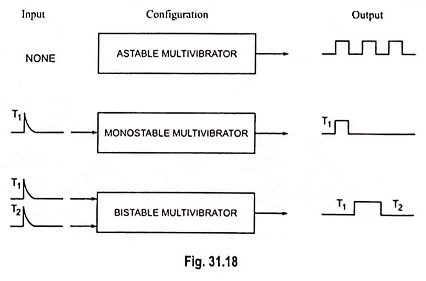