The 8-4-2-1 code or simply the Binary Coded Decimal code is composed of four bits representing the decimal digits 0 through 9, 8, 4, 2 and 1 are the weights of the four bits (23, 22, 21, 20) of each decimal digit similar to straight binary number system. The ease of conversion between 8-4-2-1 code numbers and familiar decimal numbers is the main advantage of this code.

The BCD code means that each decimal digit is represented by a binary code of four bits. Clearly only the 4-bit binary numbers from 0000 through 1001 are used. The Binary Coded Decimal code does not use the numbers 1010, 1011, 1100, 1101, 1110, and 1111. In other words, only 10 of the sixteen (24) possible 4-bit binary code groups are used. If any of the ‘forbidden’ 4-bit number ever occurs in a machine using the Binary Coded Decimal code, it is usually an indication that an error has occurred. 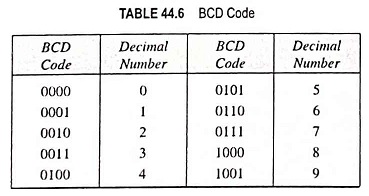 It is very important to realize that BCD is not another number system like binary, octal, decimal, and hexadecimal. It is, in fact, the decimal system with each decimal digit encoded in its binary equivalent. It is also important to note that a BCD number is not the same number as a straight binary number. A straight binary code takes the complete decimal number and represents it in binary while the Binary Coded Decimal code converts each decimal digit to binary individually.

Binary Coded Decimal code is a numerical code, and many applications need that arithmetic operations be carried out. Addition is the most important operation because the other three operations (subtraction, multiplication and division) can be accomplished using addition. For adding two BCD numbers :

For subtracting the two numbers: