What is Real Diode?

As already mentioned, an actual diode neither behaves as a perfect conductor when forward biased nor as a perfect insulator when reverse biased. 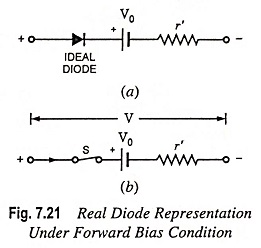 Voltage-current char­acteristic of a real diodes un­der forward bias condition is shown in Fig. 7.22 which follows the Eq. (7.33). Here, the reciprocal of the slope of this characteristic repre­sents the ac or dynamic re­sistance r’ of the diode. 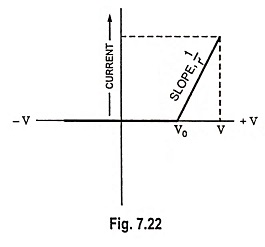 For large signal sources whose voltage is much greater than the diode barrier potential V0 (or knee voltage Vk), forward current I would be large and the ac or dynamic re­sistance r’ of the diode will be equal to bulk resistance rB of the diode as explained in Fig. 7.11.

For small signal sources whose voltage is much smaller than V0 or Vk, forward current I would be small and the ac or dynamic resistance of r’ of the diode will be equal to apparent forward or junction resistance r given by Eq. (7.32b) because for smaller values of forward current rB is negligible. 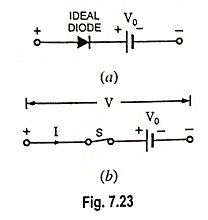 An actual or real diodes does not behave as a perfect insulator when reverse biased. As already explained in Fig. 7.11, the reverse resistance of silicon and germanium diodes is quite large compared to the forward resistance. It may he of the order of many thousands of mega ohms. Hence an actual diode in the reverse bias condition can be thought of as equivalent to a resistor of high resistance.

Unilateral diodes can be used for rectification of alternating currents, wave shaping of ac signals and many other applications. Wave shaping involves alteration of ac signals by passing only certain portions of the signal while blocking other portions.

Junction diodes designed for use as rectifiers must have volt-ampere characteristics close to those of an ideal diode. The reverse current should be negligible and forward current should exhibit little voltage dependence. The reverse breakdown voltage should be large and the offset or barrier potential V0 in forward direction should be small. No diode can offer all these properties.

The requirements for good rectifier junctions are :

A large-signal approximation which usually leads to a sufficiently accurate engineering solution is the piecewise linear representation. For instance, the piecewise linear approximation for a semiconductor diode is given in Fig. 7.22. The break point is not at the origin, and therefore, V0 (or Vγ) is also known as the offset, or threshold, voltage. The diode behaves like an open circuit when the applied voltage is less than potential barrier V0, and has a constant incremental resistance r′ = dV/dI when applied voltage exceeds potential barrier or threshold voltage. The equivalent circuit for this linear approximation is a constant voltage source in series with a resistor [Fig. 7.21 (b)]. This method models the diode with segments of straight lines : thus the name piecewise linear model.