One quadrant converters can also be obtained by connecting a free wheeling diode across the load terminals. This is possible with both midpoint and bridge converters, as shown in Fig. 3.54. The Two pulse converters with freewheeling diode provides a local path for the load current when the thyristors are reverse biased. The thyristor conducts only for (π —α), instead of π, similar to the case of an unsymmetrical half controlled bridge. The free wheeling of the load current does not allow negative swings of the load voltage, and the load voltage is zero. The dc output voltage is 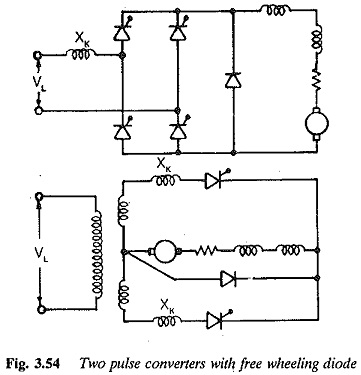 The absence of negative swings in the output voltage improves the output voltage as far as its ripple is concerned. The associated smoothing inductance is also small. The reduction in the conduction angle of the input current ripple, as the firing angle increases, decreases the total reactive power demand. The commutation reactive power does not, however, change. The voltage and current waveforms are shown in Fig. 3.55. 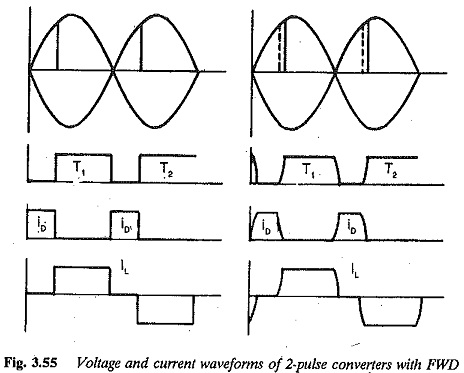 The behaviour of these converters is same as that of symmetrical and un­symmetrical bridge connections. The Two pulse converters with freewheeling diode is effective in the complete range of firing angles, α = 0 to 180°.