where gm is the transconductance or gain of the OTA. The unique feature of an Operational Transconductance Amplifier is that gm can be varied over a wide range by means of an external control current Ic. Usually, gm is proportional to Ic so that

Normally, OTAs are operated without feedback in linear applications. This is possible because the magnitude of the resistance attached to its output controls its output voltage. The major drawback is that if the differential input signal is not small, it may lead to distortion. Typically input signal remains below 100 mV peak-to­-peak. 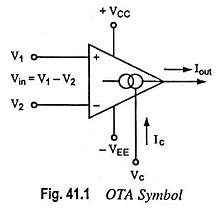 Operational Transconductance Amplifier finds applications in implementing programmable ampli­fiers and integrators in audio- processing and electronic music syn­thesis. They are also employed as current switches in sample and hold applications. One of the important use of OTAs using VLSI technique is in neutral networks. Popular OTAs are LM 3080, LMI 3600/3700 (National Semiconductor) CA 3080 (RCA) and the NE 5517 (Signetics).

The simplified internal circuit diagram of an OTA is shown in Fig. 41.2. 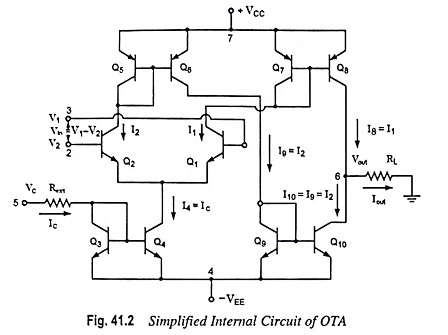 Also, transistors Q5 – Q6 form current mirror, so that the current coming from collector of Q6 to Q9 duplicates I2. 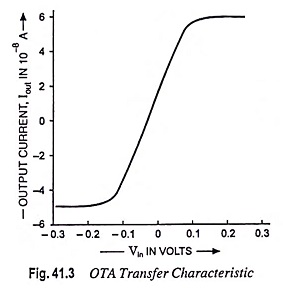 Now, at the output, applying Kirchoff’s current law, we have,

The voltage gain of the amplifier can be expressed as

The transconductance gm can be calculated as [behaving like diode]

and VT = Volt equivalent of temperature

Now the controlling current is given as

Multiplying numerator and denominator by exp 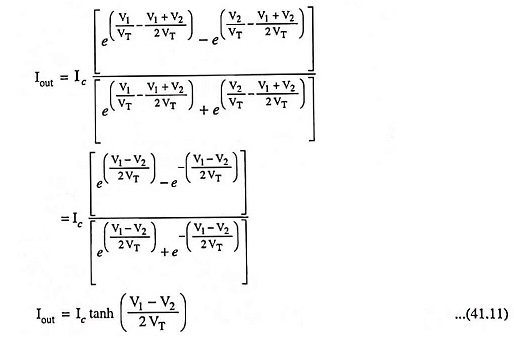 The above equation depicts that output current Iout is a function of differential voltage Vin i.e., (V1 – V2). Thus a transconductance amplifier normally computes a tan-hyperbolic. For smaller range of inputs the output current behaves linearly and smoothly shifts to saturation. Transfer characteristic of OTA is given in Fig. 41.3.

Thus, the voltage gain of the Operational Transconductance Amplifier is controlled externally by a controlling current Ic.

The OTA IC CA 3080 has few limitations as follows:

Principal Differences From Standard Op-Amps: There are two main differences between the OTA and the conventional Op-amp: