As a matter of fact, the generation of Vestigial Sideband Modulation signals is easier than other modulated signals such as conventional AM, DSBSC and SSB signals. Its bandwidth is only slightly higher (approximately 25%) than SSB signals but considerably less than DSBSC signals. SSB modulation is rather most suited for the transmission of voice signals because of the energy gap that exists in the frequency spectrum of the voice signals between zero and few hundred Hz. On the other hand, when signals contain frequency components at extremely low frequencies (as in telegraph signals) the USB and LSB of the translated signal tend to meet at the carrier frequency. Under such circumstances, it becomes very difficult to isolate one sideband from the other. Hence, SSB scheme becomes unsuitable for handling such types of signals.

This difficulty has been overcome in a scheme known as VSB modulation. In Vestigial Sideband Modulation instead of rejecting one sideband completely as in SSB modulation scheme, a gradual cutoff of one sideband is allowed. This gradual cut is compensated by a vestige or portion of the other sideband.

The technique has been illustrated in Fig. 22.24 which shows the frequency spectrum of the modulating signal and corresponding DSBSC, SSB and VSB signals. 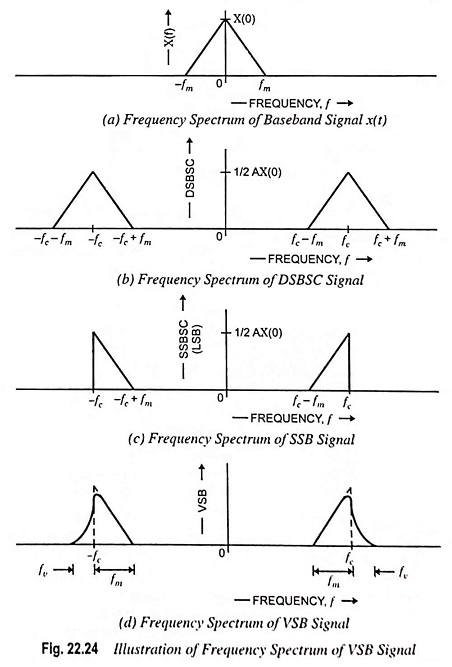 Obviously, the bandwidth of VSB signal is given by

where fm is the BW of the message signal, and fv is BW of the VSB.