In this Pulse Position Modulation system, the amplitude and width of pulses is kept constant, while the position of each pulse, in relation to the position of a recurrent reference pulse, is varied by each instantaneous sampled value of the modulating wave. 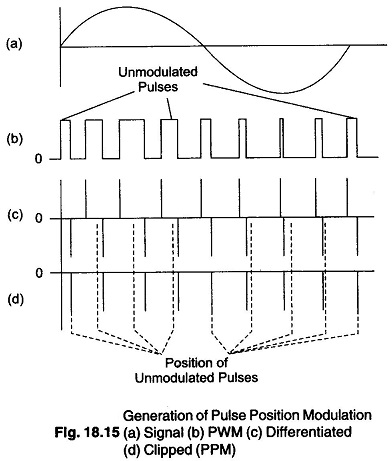 When the PPM is demodulated in the receiver, it is again first converted into PWM with a F/F or bistable multivibrator. (One input of the multivibrator receives trigger pulses from a local generator which is synchronised by the trigger pulses received from the transmitter, and these triggers are used to switch OFF one of the stages of F/F.) The PPM pulses are fed to the other base of the F/F, and switch that stage ON (by switching the other one OFF). The period of time during which this particular stage is OFF depends on the time difference between the two triggers, so that the resulting pulse has a width that depends on the time displacement of each individual PPM pulse. The resulting PWM pulse train is then demodulated.

(PPM has the advantage of requiring constant transmitted power output, but has the disadvantage of depending on transmitter-receiver synchronism.

PWM has a disadvantage, when compared to pulse position modulation, in that its pulses are of varying power width and therefore of varying power content. This means that the transmitter must be powerful enough to handle pulses of maximum width (although the average power transmitted is only half the peak power).