Signal Conditioning System – The measurand, which is basically a physical quantity, is detected by the first stage of the instrumentation or measurement system. The first stage is the detector transducer stage. The quantity is detected and converted or transduced into an electrical form in most cases. The output of the first stage has to be modified before it becomes usable and sufficient to drive the signal indicating stage which is the last stage. This last stage may consist of indicating, recording, displaying and data processing elements, or may consist of control elements.

In an electronic-aided measurement, the quantity to be measured is converted into an electrical signal and then amplified or otherwise modified to operate a device which displays the numerical value of the measured quantity. This proc-ess is illustrated for a typical case in the pictorial block diagram shown in Fig. 14.1.

The output number is obtained from a readout device such as a meter or chart recorder, where the position of a marker against a numbered scale is observed, or from lights in the shape of numbers which are turned ON.

Measurement of dynamic physical quantities requires faithful representation of their analog or digital output obtained from the intermediate stage (signal conditioning stage) and this places a severe strain on the Signal Conditioning System. 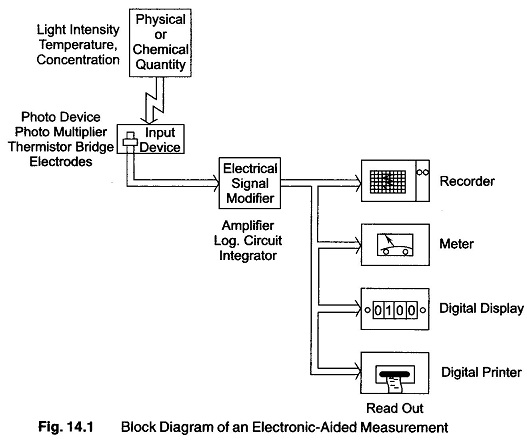 The Signal Conditioning System may be required to perform linear proc­esses such as amplification, attenuation, integration, differentiation, addition or subtraction. They are also required to do non-linear processes such as modula­tion, demodulation, sampling, filtering, clipping and clamping, squaring and linearizing or multiplication by another function. These functions require proper selection of components and faithful reproduction of the final output for the presentation stage.

Active transducers such as thermocouples, piezo-electric crystal and induc­tive pickups etc. do not require an external excitation because they produce their own voltages only by the application of physical quantities. However these signals are at a low level, and require amplification.

The excitation source may be ac or dc. A simple dc system is shown in Fig. 14.2.

The strain gauge (resistance transducer) constitutes one or more arm of the Wheatstone’s bridge, which is excited by the dc source. The bridge can be bal­anced by using a potentiometer and can also be calibrated to indicate the unbalanced condition. The dc amplifier should have the following characteristics.

The dc amplifiers is followed by a low-pass filter, which is used to eliminate high frequency components or noise from the data signals.

In order to overcome the problem of drift in the dc systems, ac systems are used. Figure 14.3 shows a circuit of an ac system using carrier type ac Signal Conditioning System.

In a carrier system amplifier, frequency drift and presence of spurious sig­nals are not much of a problem. However it is more difficult to obtain a stable carrier oscillator than a dc stabilized source. Active filters can be used to reject this frequency and prevent overloading of the ac amplifier. The function of the phase sensitive detector is to filter out the carrier frequency components of the data signal.

To summaries, dc systems are generally used for common resistance trans­ducers (such as potentiometers and resistance strain gauges).

AC systems are used for variable reactance transducers and for systems where signals have to be transmitted via long cables to connect the transducers to Signal Conditioning System.

After physical quantities like temperature, pressure, strain, acceleration, etc. have been transduced into their analogous electrical form and amplified to sufficient current and voltage levels (say 1 – 10 V), they are further processed and the amplified signal applied directly to the indicating, recording or control systems. 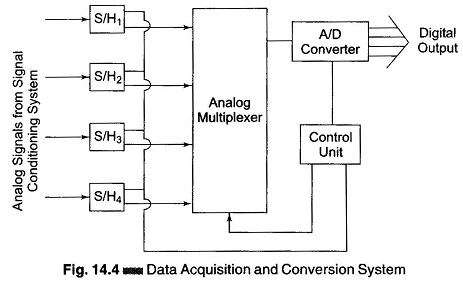 The Sample-Hold unit shown in Fig. 14.4 samples the various inputs at a specified time and holds the voltage levels at their output while analog multi­plexer performs the Time Division Multiplexing (TDM) operation between different data inputs.

TDM means each channel is sequentially multiplexed for a certain specified time, i.e. each channel is time shared. The timing of various input channels is controlled by a control unit. This unit controls the S/H circuit, multiplexer and A/D converter.