If both the gate and drain voltages are varied, the change in drain current is given approximately by the first two terms in the Taylor’s series expansion of Eq. (13.32) or

Parameter gm is the mutual conductance, or transconductance

The reciprocal of rd is the drain conductance gd. 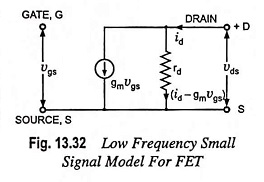 Circuit shown in Fig. 13.32 is made satisfying Eq. (13.34) giving the incremental drain current id in form of gm, rd, vgs and vds. This circuit forms the low frequency Small Signal Model of FET: This model consists of one dependent current generator whose current gmvgs is proportional to the time varying gate source voltage vgs and proportionality constant is the transconductance gm. 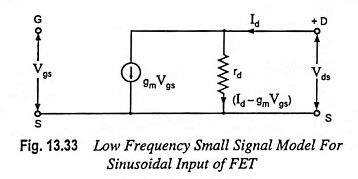 The arrow points from drain to source to indicate a phase change of 180° (or phase reversal) between output and input voltages as will occur in actual operation. In low frequency model, as the gate is reverse biased, the gate current becomes zero. So, in low frequency model, gate to source junction is represented by an open circuit and no current is drawn by the input terminal of the FET. The reason is that input resistance, (gate-to-source resistance) is very large. The output resistance is represented by the resistance rd (resistance from drain to source). If rd is suffi­ciently large as compared to those of other circuit ele­ments, this is ignored. Now the equivalent circuit be­comes simply a current source whose magnitude is controlled by vgs and gm—clearly a voltage con­trolled current source. 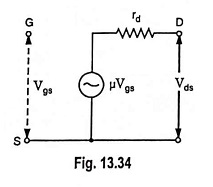 Small Signal Model of FET for sinusoi­dal input voltage of rms value Vgs may be drawn, as shown in Fig. 13.33 where vgs, id, vds have been replaced respectively by rms values Vgs, Id and Vds. The voltage-controlled current source (gm Vgs) can be replaced by equivalent volt­age-controlled voltage source (μVgs) as depicted in Fig. 13.34.

Now the equivalent circuit consists of a voltage source (μVgs) in series with a drain resistance rd. Here μ is the amplification factor of the FET and is equal to the product of transconductance gm and drain resistance rd i.e., μ = gmrd.

Comparison of Low Frequency Models of FET and BJT:

High Frequency Model: At low frequency, reactance offered by interelectrode capaci­tance is very large and, therefore, interelectrode capacitances do not appear in low frequency equivalent circuit. At higher fre­quencies device capacitances between terminals cause reduction in amplifier gain as capacitive impedance decreases with the in­crease in supply frequency. Such circuit capacitances resulted in due to device construction or stray wir­ing are shown as connected with dashed lines in the cir­cuit of Fig. 13.35 to indi­cate that they are not ca­pacitances that are con­nected into the circuit in­tentionally but arise as a result of the circuit and de­vice construction. 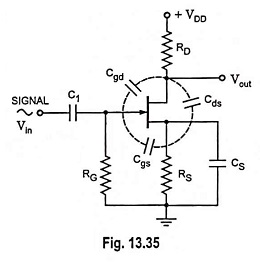 Figure 13.36 depicts the high frequency model of the FET which is identical with Fig. 13.32 except that the capacitances between the gate-source and gate-drain nodes are shown in the figure. The capacitor Cgs represents the barrier capacitance between gate and source, and Cgd is the barrier capacitance between gate and drain. The element Cds represents the drain to source capacitance of the channel. Because of these internal capacitances feedback exists between the input and output circuits of the FET and voltage amplification drops drastically with increase in frequency. 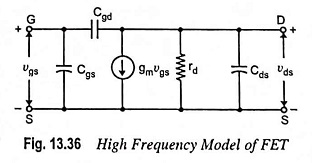