What is Analog Signal and Digital Signal?

What is Analog Signal and Digital Signal? – In communication systems, a signal means a time varying electri­cal signal which contains all information or intelligence. The ana­log signal is that type of signal which varies smoothly and continu­ously with time. This means that analog signals are defined for every value of time and they take on continuous values in a given time interval. Thus, we can say that analog messages are character­ized by data whose values vary over a continuous range. The signal depicted in Fig. 23.1 is an analog signal. 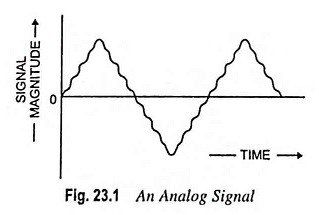 For an analog signal, the name derives from the fact that such a signal is analogous to the physical signal that it represents. The vast majority of signals in the world around us are analog. For example, the temperature or the atmospheric pressure of a certain location may vary over a con­tinuous range and may assume an infinite number of possible val­ues. Similarly, a speech waveform is an analog signal since it has amplitudes that vary over a continuous range.

An alternative form of signal representation is that of a sequence of numbers, each number representing the signal magnitude at an instant of time. The resulting signal is called a digital signal. Digital messages are constructed with a finite number of symbols. For example, the printed language consists of 26 letters, 10 digits, a space and several punctuation marks. Thus, any text is a digital message constructed from about 50 symbols. 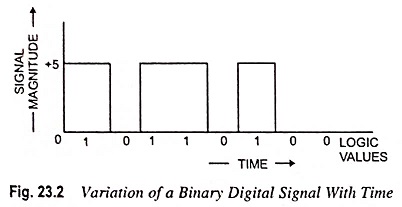