Figure 19.7 represents the block diagram of an Feedback Amplifier. The output quantity (either voltage or current) is sampled by means of a suitable sampling network (or sampler) and is fed to the feedback network. The output of feedback network, which has a fraction of output signal is combined with the external (source) signal through a mixer network and fed into the basic amplifier. 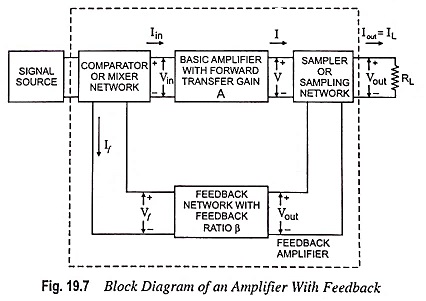 The different blocks of feedback amplifier are explained below:

2. Feedback Network : The feedback network is usually in the form of a passive two-port network and may be formed of resistors, inductor and capacitors (most often of resistors). Its function is to return a function of the output energy (voltage or current) to the input of the amplifier. 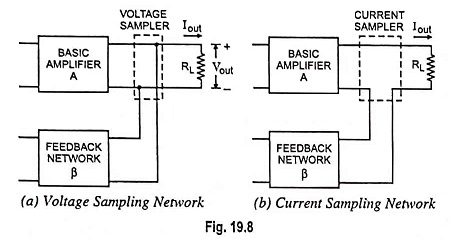 4. Comparator, or Mixer, Network : Mixer, also known as comparator, is of two types, namely, series mixer and shunt mixer, as shown in Fig. 19.9. A differential amplifier, which has two inputs and one output proportional to difference between the signals at the two inputs, is usually used as a mixer or comparator. 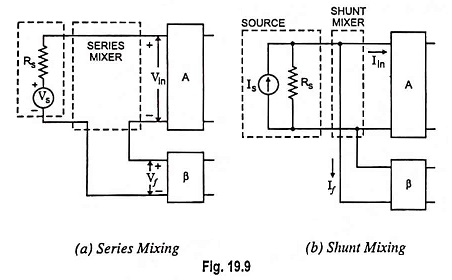 The symbol Af defined as the ratio of the output signal to the input signal of the amplifier configuration shown in Fig. 19.7, is shown as the transfer gain of the amplifier with feedback. Thus, Af is used to represent any one of the four ratios Vout/Vs = Avf, Iout/Is = Aif, Iout/Vs = Gmf and Vout/Is = Rmf.