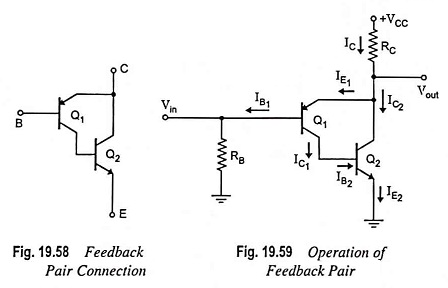 The collector current of transistor Q1 is given by

The collector current of transistor Q2 is given by

So that current through RC is

AC equivalent circuit of the feedback pair (Fig. 19.59) is given in Fig. 19.60. Figure 19.60 (a) is drawn to indicate clearly each transistor and the base and collector resistor placement and ac equivalent for the purpose of analysis is shown in Fig. 19.60 (b). 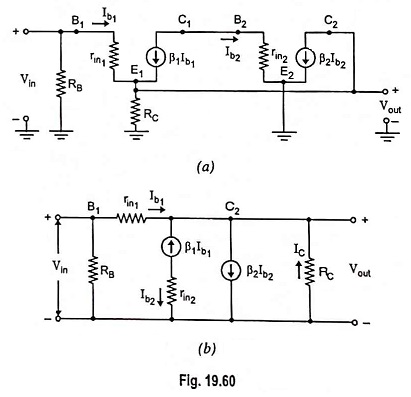 The ac input impedance seen looking into the base of transistor Q1 is determined [Fig. 19.60 (b)] as follows:

The ac current gain is determined as follows:

Including RB, the current gain is given by

The ac output impedance may be obtained by applying a voltage Vout with Vin set to zero. The resulting analysis gives that

It results in low output impedance.

The ac voltage gain is determined as follows :