The high voltage connection from the first transformer winding and the excitation winding terminal are taken through a bushing to the second transformer. In a similar manner, the third transformer is kept on insulators above the ground at a potential of 2V2 and is supplied likewise from the second transformer. The number of stages in this type of arrangement are usually two to four, but very often, three stages are adopted to facilitate a three-phase operation so that √3V2 can be obtained between the lines. 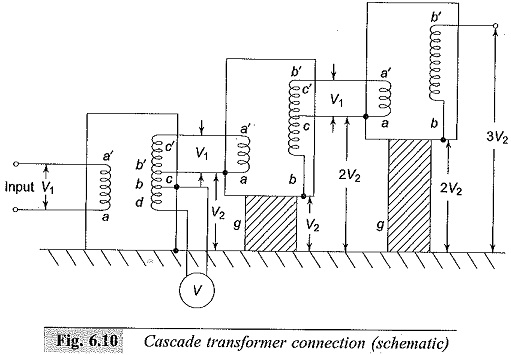 In Fig. 6.11, a second scheme for providing the excitation to the second and the third stages is shown. Isolating transformers Is1, Is2 and Is3 are 1 : 1 ratio transformers insulated to their respective tank potentials and are meant for supplying the excitation for the second and the third stages at their tank potentials. Power supply to the isolating transformers is also fed from the same a.c. input. This scheme is expensive and requires more space. 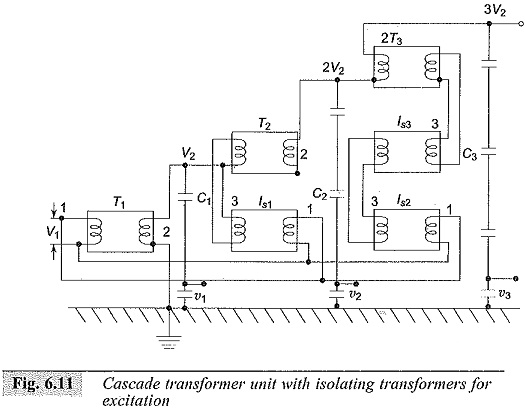 Testing of an H.V. apparatus or insulation always involves supplying of capacitive loads with very low power dissipation. Thus if C is the capacitance of the test object, V is the rms value of the nominal output voltage of the transformer at an angular frequency ω, then the nominal rating of the transformer in kVA will be P = K . V2 ωC, where K (> 1.0) is a factor to account for any extra capacitance in the test circuit like that of the measuring capacitance divider etc. K may have values of the order of 2 or more for very high voltages (> 1 MV). Typical capacitance values for high capacitance test objects like power transformers, cables, etc. are as follows:

The charging currents for the test apparatus may range from 10 mA at 100 kV to a few milliamperes in the megavolt range. As such the transformers should have only a short time rating (10 to 15 min) for high power ratings, as compared to those–with nominal power ratings.

Large testing transformers rated for more than 1 MVA at 1 MV are nowadays designed for outdoor use only. The design is of the type mentioned in the second scheme and ensures that the units are enclosed by large-size metal rings to prevent corona, and are terminated with near spherical polycone electrodes. Modern test transformers are built to withstand transients during the flashover of the test object. However, particular care neet to be taken to see that steady state voltage distribution within the cascade units is uniform.

Sometimes reactor compensation may have to be provided for excessive load currents of capacitive nature. Cascade Transformer Connection are very expensive apparatus and are difficult to repair. Therefore it is necessary to limit the high short-circuit currents by using limiting reactors in the input stage.

Large Cascade Transformer Connection units are supplied power through a separate motor-generator set or by means of voltage regulators. Supply through a voltage regulator will be cheaper, and will be more flexible in the sense that the units in the cascade set can be operated in cascade, or in parallel, or as three-phase units. It is also necessary that the impedance of the voltage regulating transformer is low in all voltage positions, from the minimum to the rated value.