Single Sideband Modulation (SSB) can he obtained by passing the output of a carrier suppressor (product modulator) through filter circuits that are selective to transmit one sideband while suppressing the other. However, this method is suitable only for obtaining Single Sideband Modulation corresponding to low or moderate carrier frequencies. The other method is the phase shift method which avoids filter and instead uses two balanced modulators and two phase shifting networks. These two methods are described as below:

In a frequency discrimination method, firstly, a DSBSC signal is generated simply by using an ordinary product modulator or a balanced modulator. After this, from the DSBSC signal one of the two sidebands is filtered out by a suitable bandpass filter. The schematic diagram for this method is depicted in Fig. 22.38.

In fact, the design of bandpass filter is quite critical and thus puts some limitations on the modulating or baseband and carrier frequencies. The frequency discrimination method for SSBSC generation have got following limitations. 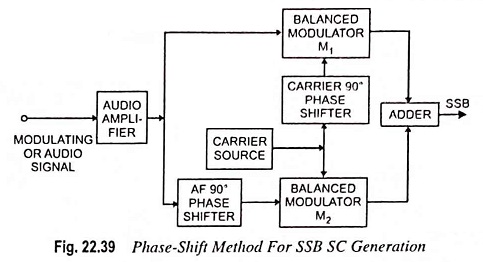 Similarly, the output of balanced modulator M2 will contain

Thus, the output of adder will be

The extent of SB suppression depends upon (i) balancing capacity of the modulator (ii) control accuracy of the 90° phase of the carrier waves and (iii) error in maintenance of 90° shift between the two modulating waves.

The phase shift method was introduced to overcome the bulk of filter system using L-C filters. This method has the advantages of (i) ease of switching from one SB to another (ii) ability of generating Single Sideband Modulation at any frequency and (iii) use of low audio frequencies for modulation.