Dynatron operates in the negative resistance region of the characteristics of a tetrode, which is coupled to an L-C tank circuit.

Tunnel diode oscillator makes use of a tunnel diode for producing oscillations. 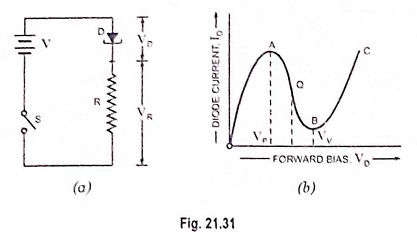 When the switch S is closed, the current immediately rises to a value determined by R and the diode resistance which are in series. The applied voltage V divides across D and R according to the ratio of their resistances. However, as diode voltage VD exceeds VP (point A), diode is driven into the negative resistance region and its resistance starts increasing. So VD increases further till it becomes equal to valley voltage VV (point B). At this point further increase in VD drives the diode into the positive resistance region BC [Fig. 21.31 (b)].

A practical circuit of a tunnel diode oscillator in two slightly different ways is shown in Fig. 21.32. Here R2 sets the proper bias level for the diode whereas R1 in parallel with the L-C tank circuit sets proper current level for it. The capacitor Cc is the coupling capacitor. As the switch is closed, the tunnel diode is set into oscillations whose frequency is equal to the resonant frequency of the tank circuit.

The tunnel diode operates very fast and it is possible to make tunnel diode oscillators which operate in the microwave frequency region. A tunnel diode has a characteristic with a negative resistance oscillators region between voltages of about 0.1 and 0.3 V and can be used as an oscillator at frequencies up to 100 GHz.