The circuit shown in Fig. 13-20 has a Two Stage Differential Amplifier with Negative Feedback with npn BJTs, and a direct-coupled pnp transistor differential amplifier second stage. The circuit uses a plus/minus supply voltage, and the base terminals of Q1 and Q2 are biased to ground via resistors R1 and R6, respectively. Transistors Q3 and Q4 have the bases directly connected to the collector terminals of Q1 and Q2. So, bias voltage for Q3 and Q4 bases is provided by the voltage drops across the Q1 and Q2 collector resistors, (R2 and R4). 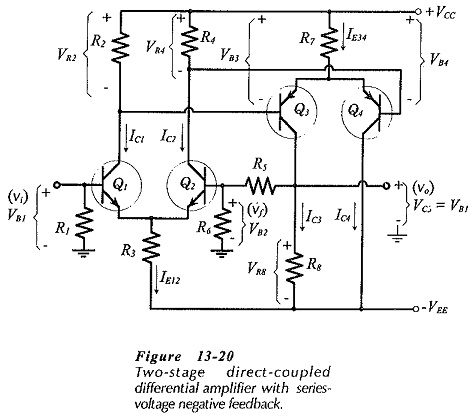 The amplifier input terminal is the base of Q1, and the output is taken from Q3 collector. No collector resistor is provided for Q4, because no output or feedback is taken from Q4. Note that the feedback network (R5 and R6) is connected from the output at the collector of Q3 back to the base of Q2. Because the emitter of Q2 is directly coupled to Q1 emitter, applying the feedback voltage (vf) to Q2 base is similar to applying it to Q1 emitter.

The circuit in Fig. 13-20 is designed to have the do bias voltage at Q2 base equal to Q1 base bias voltage; in this case, ground level. This means that the do voltage at the collector of Q3 must also equal the Q1 base voltage, because Q3 collector is directly connected to Q2 base via R5. Consider what would happen if VC3 (at the output terminal ) is not exactly equal to VB1 (at the input).

It is seen that there is do negative feedback that stabilizes the circuit bias conditions. 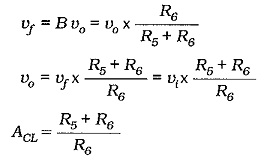 The input and output impedances for a circuit with a Two Stage Differential Amplifier with Negative Feedback are calculated exactly as discussed for other negative feedback circuits.

The second stage components are determined in essentially the same way as the input stage components, bearing in mind that the second stage is upside down compared to the input stage. Feedback network resistor R6 at the base of Q2 is selected equal to bias resistor R1 at Q1 base. This is to equalize the resistances at the bases of Q1 and Q2, and thus equalize any voltage drops due to IB1 and IB2. R5 is calculated from the specified closed loop gain and the R6 resistance.

The output impedance at Q5 emitter terminal in Fig. 13-23 is found from the common-collector circuit

This quantity is modified by negative feedback

Then, as always, the circuit output impedance which must also be rewritten for the circuit in Fig. 13-23.