The FET Common Gate Circuit (CG) shown in Fig. 11-19 uses voltage divider bias. The ac output is taken from the drain terminal, and an external load (RL) is capacitor-coupled to the drain, exactly as in the case of a common-source circuit. Unlike a CS circuit, the ac input for the CG circuit is applied to the FET source terminal (via C3), and a capacitor (C1) is included to ac short-circuit the gate to ground. Because the gate is grounded, all of the ac input voltage appears across the gate-source terminals. 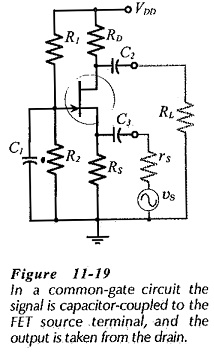 The current and voltage wave forms for the CG circuit shown in Fig. 11-20 illustrate the circuit operation. When the instantaneous level of the ac signal voltage increases, the source voltage increases while the gate voltage remains constant. Consequently, the gate-source voltage decreases, the drain current is reduced, and the output voltage at the drain terminal is increased. Similarly, when vi decreases, vgs increases, Id increases, and vd decreases. Thus, an increase in vi causes an increase in vo, and a decrease in vi produces a decrease in vo, so, there is no phase shift between the input and the output. (See the voltage and current waveforms in Fig. 11-20.)

As in the case of other circuits, the supply voltage and capacitors in Fig. 11-19 are replaced with short-circuits in order to study the circuit ac performance. This gives the common-gate ac equivalent circuit in Fig. 11-21(a). The input terminals of the ac equivalent circuit are seen to be the PET source and gate, and the output terminals are the drain and gate. The gate terminal is common to both input and output, so the circuit is named common-gate. 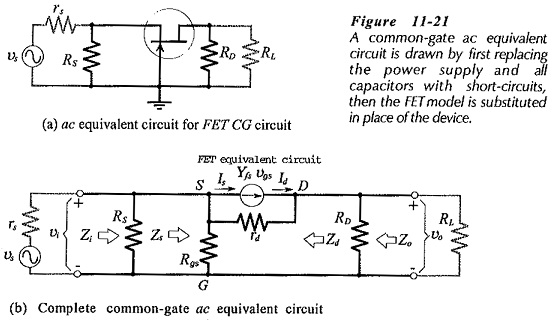 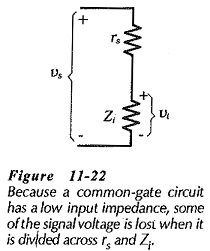 and the circuit output impedance is, 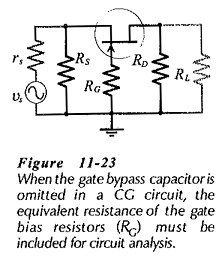 When Rgs ≫ RG (which is usually the case), Eq. 11-21 gives Zi = 1/Yfs, and Eq 11-22 gives Av= Yfs(RD||RL), which are the equations for a CG circuit with the gate bypassed to ground The Zi and Av effects occur only in situations where very high value bias resistors are used in a CG circuit. Figure 11-24 shows a CG circuit that uses self bias. In this case, RG is omitted because there is no signal applied at the gate input; the gate is directly grounded and no gate bypass capacitor is required. 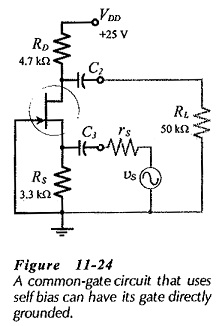 With the gate bypassed to ground:

A Common Gate Circuit has a voltage gain, no phase shift between input and output, low input impedance, and relatively high output impedance.