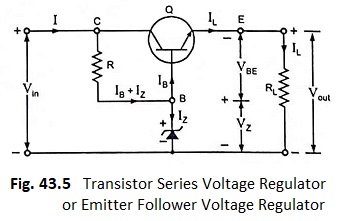 Here, the transistor Q is termed a series-pass transistor. The unregulated dc supply (or filtered output from the rectifier) is fed to the input terminals and regulated output voltage Vout is obtained across the load resistor RL. Zener diode provides the reference voltage and the transistor acts as a variable resistor, whose resistance varies with the operating conditions (base current IB). The principle of operation of such a regulator is based on the fact that a large proportion of the change in supply (or input) voltage appears across the transistor and, therefore output voltage tends to remain constant.

Keeping in mind the polarities of different voltages we have

The base voltage of the transistor remains almost constant being equal to that across the zener diode, VZ.

The advantage of such a emitter follower voltage regulator circuit is that the changes in zener current are reduced by a factor β and thus zener effect is greatly reduced and much more stabilized output is obtained.

Because of above limitations application of this regulator is limited to low output voltages.