Zero bias PN junction – Here we will examine the properties of the step junction in thermal equilibrium, where no currents exist and no external excitation is applied. We will determine built-in potential barrier through the depletion or space-charge region, electric field and width of the space-charge region.

When no voltage is applied across the P-N junction (i.e., with zero applied bias), the junction is in the thermal equilibrium—the Fermi energy level is constant throughout the entire specimen. The valence and conduction bands energies have to bend while moving through the space-charge region because the relative position of these bands with respect to the Fermi energy changes between P and N regions. 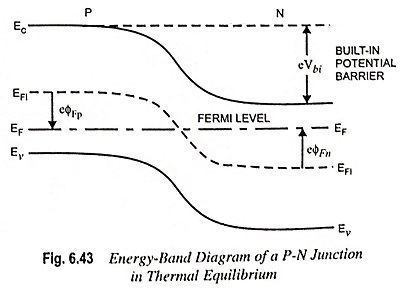 The electron concentration in the N-region conduction band,

where EFi and ni are the intrinsic Fermi energy and intrinsic carrier concentration, respectively.

Potential ΦFn in the N-region is defined as

Similarly for the P-region,

The built-in potential barrier for the step junction is then

where VT is defined as the thermal voltage and is equal to k′T/e. 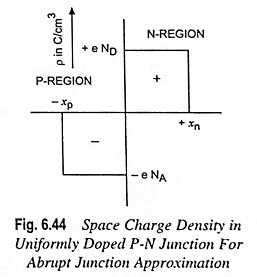 Let us assume that the space charge region abruptly ends in the N-region at x = + xn and at x = – xp (xp is a positive quantity) in the P-region.

The electric field is found from Poisson’s equation and is

From Fig. 6.44, the charge densities are

where C1 is a constant of integration.

The electric field is assumed to be zero in the neutral P-region for x < – xp as in thermal equilibrium the currents are zero. Since there are no surface charge densities within the Zero bias PN junction structure, the electric field is a continuous function. The constant of integration can be found by setting E = 0 at x = – xp.

The electric field in the N-region can be found from

where C2 is another constant of integration which can be determined by setting E = 0 at x = xn, because the E-field is assumed to be zero in the N-region and is a continuous function. Thus we have 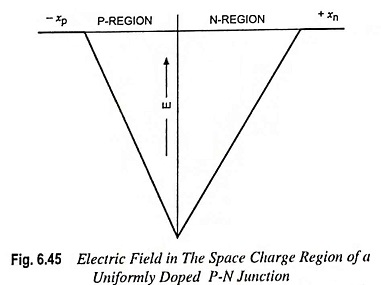 Integration of electric field gives potential in the junction. In the P-region, we have

Thus the expression for potential in the P-region becomes

where C4 is a constant of integration. Setting Eqs. (6.160) and (6.162) equal at the metallurgical junction, or at x = 0 (because potential is a continuous function), we have

A plot of potential through the junction is depicted in Fig. 6.46. It shows the quadratic dependence of potential on the distance x. 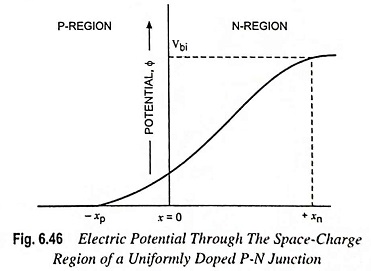 The magnitude of the potential at x = xn is equal to the built-in potential barrier Vbi, Eq. (6.163) yields.

The above Eq. (6.166) provides the space charge width, or the width of the depletion region xn extending into N-region when the no voltage is applied between the P and N-regions.