There is a transmission through the capacitor producing finite output for finite input, at all the frequencies. But at s = 0 i.e. at zero frequency, the capacitor reactance becomes infinite and it acts as open circuit. There can not be any output, though there is finite input at zero frequency. Thus s = 0 is called zero of transmission for this network.

Consider the network shown in the Fig. 7.29.

The transmission is through LC parallel circuit. For ideal L and C the impedance of the parallel resonant circuit is ∞. It acts as open circuit at a resonant frequency of 1/√LC

Now if finite input is applied at ωr = 1/√LC, then LC resonant circuit acts as open  circuit which results into Transmission Zero. Thus the zeros of transmission for this networks are s = ± j 1/√LC.

Consider another network shown in the. Fig. 7.30.

Consider a network with LC series network as transmitting network as shown in the Fig. 7.31. For ideal L and C, as resonant frequency ωr = 1/√LC, the impedance of LC series resonant circuit is zero. It acts as short circuit, producing zero output.

Consider the networks shown in the Fig. 7.32 and Fig. 7.33 with inductor in series arm and capacitor in shunt arm respectively.

At s = ∞, the inductor acts as open circuit and capacitor acts as short producing zero output. Hence the zero of transmission is at s = co for both these networks.

The table 7.2 gives possible combinations of elements and the corresponding Transmission Zero. 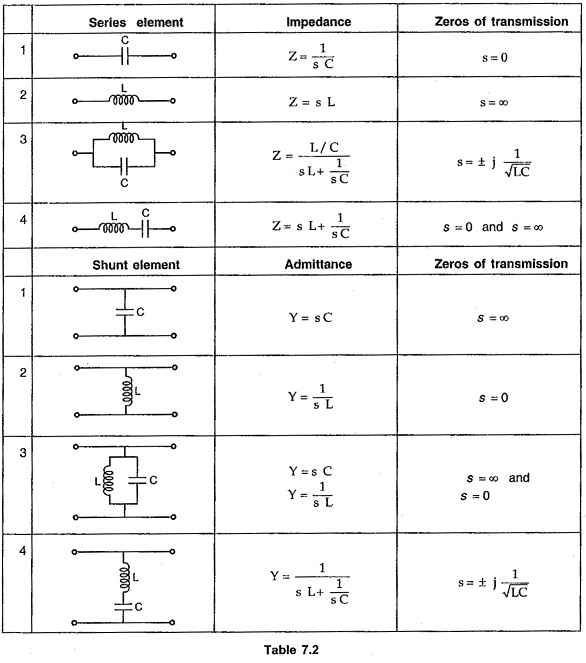 Any transfer function of a passive ladder network is always minimum phase function.