Protection against Lightning Overvoltages and Switching Surges of Short Duration: 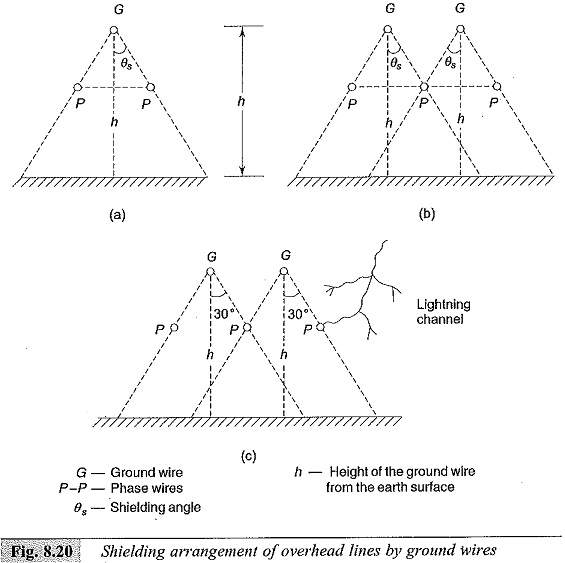 When a line is shielded, the lightning strikes either the tower or the ground wire. The path for drainage of the charge and lightning current is

(a) through the tower frame to ground,

(b) through the ground line in opposite directions from the point of striking.

ZT = surge impedance of the tower, and

If the surge impedance of the tower, which is the effective tower footing resistance, is reduced, the surge voltage developed is also reduced considerably. This is accomplished by providing driven ground rods and counter-poise wires connected to tower legs at the tower foundation.

Ground rods are a number of rods about 15 mm diameter and 2.5 to 3 m long, driven into the ground. In hard soils the rods may be much longer and can be driven to a depth of, say, 50 m. They are usually made of galvanized iron or copper bearing steel. The spacings of the rods, the number of rods, and the depth to which they are driven depend on the desired tower footing resistance. With 10 rods of 4 in long and spaced 5 m apart, connected to the legs of the tower, the dynamic or effective resistance may be reduced to 10 Ω.

The above effect is alternatively achieved by using counter-poise wires. Counter-poise wires are wires buried in the ground at a depth of 0.5 to 1.0 m, running parallel to the Transmission Line Overvoltage Protection conductors and connected to the tower legs. These wires may be 50 to 100 in long. These are found to be more effective than driven rods and the surge impedance of the tower may be reduced to as low as 25 Ω. The depth does not materially affect the resistance of the counter-poise, and it is only necessary to bury them to a depth enough to prevent theft. It is desirable to use a larger number of parallel wires than a single wire. But it is difficult to lay counter-poise wires compared to ground or driven rods.

In regions where lightning strokes are intense or heavy, the overhead lines within these zones are fitted with shunt protected devices. On the line itself two devices known as expulsion gaps and protector tubes are used. Line terminations, junctions of lines, and sub-stations are usually fitted with surge arresters.

Expulsion gap is a device which consists of a spark gap together with an arc quenching device which extinguishes the current arc when the gaps break over due to overvoltages. A typical such arrangement is shown in Fig. 8.21a. This essentially consists of a rod gap in air in series with a second gap enclosed within a fibre tube. In the event of an overvoltage, both the spark gaps breakdown simultaneously. The current due to the overvoltage is limited only by the tower footing resistance and the surge impedance of the ground wires. The internal arc in the fibre tube due to lightning current vapourizes a small portion of the fibre material. The gas thus produced, being a mixture of water vapour and the decomposed fibre product, drive away the arc products and ionized air. When the follow-on power frequency current passes through zero value, the arc is extinguished and the path becomes open circuited. Meanwhile the insulation recovers its dielectric strength, and the normal conditions are established. The lightning and follow-up power frequency currents together can last for 2 to 3 half cycles only. Therefore, generally no disturbance in the network is produced. For 132 or 220 kV lines, the maximum current rating may be about 7,500 A. 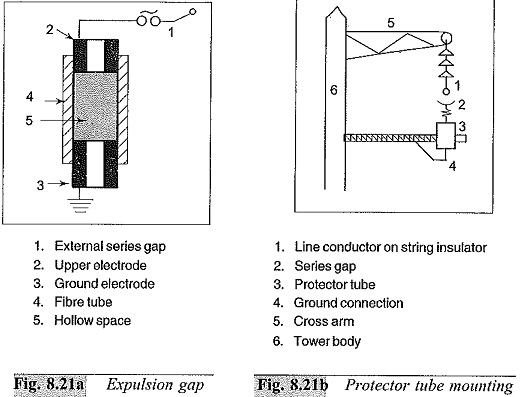 A protector tube is similar to the expulsion gap, in construction and principle. It also consists of a rod or spark gap in air formed by the line conductor and its high voltage terminal. It is mounted underneath the line conductor on a tower. The arrangement is shown in Fig. 8.21b. The hollow gap in the expulsion tube is replaced by a nonlinear element which offers a very high impedance at low currents but has low impedance for high or lightning currents. When an overvoltage occurs and the spark gap breaks down, the current is limited both by its own resistance and the tower footing resistance. The overvoltage on the line is reduced to the voltage drop across the protector tube. After the surge current is diverted and discharged to the ground, the follow-on normal power frequency current will be limited by its high resistance. After the current zero of power frequency, the spark gap recovers the insulation strength quickly. Usually, the flashover voltage of the protector tube is less than that of the line insulation, and hence it can discharge the lightning overvoltage effectively.

A much simpler and effective Transmission Line Overvoltage Protection device is a rod-gap. However, it does not meet the complete requirement. The sparkover voltage of a rod gap depends on the atmospheric conditions. A typical volt-time characteristic of a 67 cm-rod gap is shown in Fig. 8.22, with its protective margin. There is no current limiting device provided so as to limit the current after sparkover, and hence a series resistance is often used. Without a series resistance, the sparking current may be very high and the applied impulse voltage suddenly collapses to zero thus creating a steep step voltage, which sometimes proves to be very dangerous to the apparatus to be protected, such as transformer or the machine windings. Nevertheless, rod gaps do provide efficient Transmission Line Overvoltage Protection where thunderstorm activity is less and the lines are protected by ground wires. 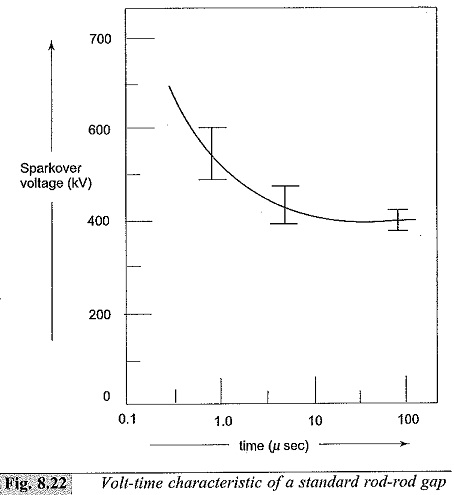 Surge diverters or lightning arresters are devices used at sub-stations and at line terminations to discharge the lightning overvoltages and short duration switching surges. These are usually mounted at the line end at the nearest point to the sub­station. They have a flashover voltage lower than that of any other insulation or apparatus at the sub-station. These are capable of discharging 10 to 20 kA of long duration surges (8/20 μs) and 100 to 250 kA of the short duration surge currents (1/5 μs).