It is well known that line constants of the transmission line are uniformly distributed over the entire length of the line. However, reasonable accuracy can be obtained in line calculations for short and medium lines by considering these constants as lumped. If such an assumption of lumped constants is applied to Long Transmission Line Voltage (having length excess of about 150 km), it is found that serious errors are introduced in the performance calculations. Therefore, in order to obtain fair degree of accuracy in the performance calculations of Long Transmission Line Voltage, the line constants are considered as uniformly distributed throughout the length of the line. Rigorous mathematical treatment is required for the solution of such lines.

Fig. 10.21 shows the equivalent circuit of a 3-phase Long Transmission Line Voltage on a phase-neutral basis. The whole line length is divided into n sections, each section having line constants 1/n th of those for the whole line. The following points may by noted :

The line constants are uniformly distributed over the entire length of line as is actually the case.

Fig. 10.22 shows one phase and neutral connection of a 3-phase hue with impedance and shunt admittance of the line uniformly distributed. 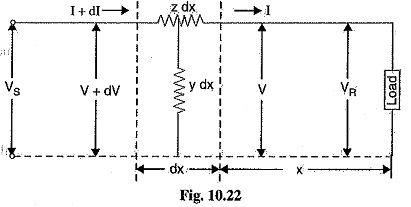 Consider a small element in the line of length dx situated at a distance x from the receiving end.

z = series impedance of the line per unit length

y= shunt admittance of the line per unit length

V = voltage at the end of element towards receiving end

V+ dV = voltage at the end of element towards sending end

I = current leaving the element dx

Then for the small element dx,

The solution of this differential equation is

Equations (iv) and (v) give the expressions for V and I in the form of unknown constants k1 and k2. The values of k1 and k2 can be found by applying end conditions as under :

Putting these values in eq. (iv), we have,

The sending end voltage (VS) and sending end current (IS) are obtained by putting x = 1 in the above equations i.e.,

Therefore, expressions for VS and IS become

It is helpful to expand hyperbolic ine and cosine in terms of their power series.