Stripline and Microstrip Transmission Line are physically related to transmission lines but are covered here because they are microwave circuits used in conjunction with semiconductor microwave devices. As illustrated of Stripline and Microstrip Transmission Line shown in Figure 12-1, stripline consists of flat metallic ground planes, separated by a thickness of dielectric in the middle of which a thin metallic strip has been buried. The conducting strip in microstrip is on top of a layer of dielectric resting on a single ground plane. Typical dielectric thicknesses vary from 0.1 to 1.5 mm, although the metallic strip may be as thin as 10 μm. 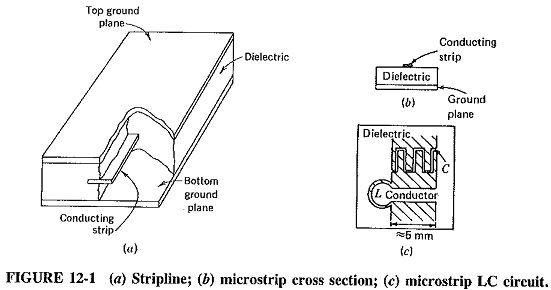 Stripline and microstrip were developed as an alternative conducting medium to waveguides and are now used very frequently in a host of microwave applications in which miniaturization has been found advantageous. Such applications include re­ceiver front ends, low-power stages of transmitters and low-power microwave circuitry in general.

Stripline is evolved from the coaxial transmission line. It may be thought of as flattened-out coaxial line in which the edges have been cut away. Propagation is similarly by means of the TEM (transverse electromagnetic) mode as a reasonable approximation. Microstrip is analogous to a parallel-wire line, consisting of the top strip and its image below the ground plane. The dielectric is often Teflon, alumina or silicon. It is possible to use several independent strips with the same ground planes and dielectric, for both types of circuits. Semiconductor microwave devices are often packaged for direct connection to stripline or microstrip.

As we know already, waveguides are used not only for interconnection but also as circuit components. The same applies to stripline and microstrip (and indeed to coaxial lines). Figure 12-1c shows a microstrip LC circuit typical capaci­tances possible are up to 1 pF, and typical inductances up to 5 nH. The stripline version would be very similar, with just a covering of dielectric and a second ground plane. Transformers can be made similar to the single-turn coil shown, and passive filters and couplers may also be fabricated. Resistances are obtained by using a patch of high-resistance metal such as Nichrome, instead of the copper conductor. Ferrite may be readily blended into such circuits, and so isolators, circulators and duplexers are quite feasible.

Microstrip has the advantage over stripline in being of simpler construction and easier integration with semiconductor devices, lending itself well to printed-circuit and thin-film techniques. On the other hand, there is a far greater tendency with microstrip to radiate from irregularities and sharp corners. Thus there is a lower isolation between adjoining circuits in microstrip than in stripline. Finally, both Q and power-handling ability are lower with microstrip.

In comparison with waveguides (and coaxial lines), stripline has two significant advantages; reduced bulk and greater bandwidth. The first of these goes without saying, while the second is due to a restriction in waveguides. In practice, these are used over the 1.5:1 frequency range, limited by cutoff wavelength at the lower end and the frequency at which higher modes may propagate at the upper end. There is no such restriction with stripline, and so bandwidths greater than 2:1 are entirely practicable.

A further advantage of stripline, as compared with waveguides, is greater compatibility for integration with microwave devices, especially semiconductor ones. On the debit side, stripline has greater losses, lower Q and much lower power-handling capacity than waveguides. Circuit isolation, although quite good, is not in the waveguide class. The final disadvantage of stripline (and consequently of microstrip) is that components made of it are not readily adjustable, unlike their waveguide counterparts.

Above about 100 GHz, stripline and microstrip costs and losses rise signifi­cantly. However, at frequencies lower than that, these circuits are very widely used, particularly at low and medium powers.