N Channel Power MOSFETs – Power MOSFETs are usually constructed in V-configuration, as shown in Fig. 13.94. That is why, the device is sometimes called the V-MOSFET or V-FET. V-shaped cut penetrates from the device surface almost to the N+ substrate through N+, P and N– layers, as seen from Fig. 13.94. The N+ layers are heavily doped, low resistive material, while the N– layer is a lightly doped, high-resistance region. The silicon dioxide dielectric layer covers both the horizontal surface and V-cut surface. The insulated gate is metal film deposited on the SiO2 in the V-cut. Source terminals make contact to the upper N+ and P-layers through the SiO2 layer. The N+ substrate is the drain terminal of the device. 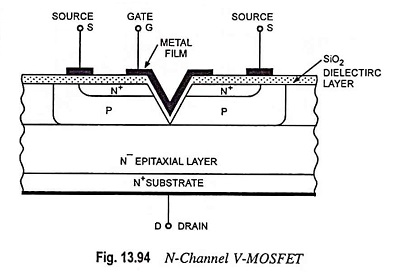 V-MOSFET is an E-mode FET and no channel exists between drain and source regions until the gate is made positive w.r.t. the source. On making gate positive w.r.t. the source, an N-type channel is formed close to the gate, as in the case of an E-MOSFET. In this case, N-type channel provides a vertical path for the charge carriers to flow between the N+ substrate (i.e., drain) and the N+ source termination. When VGS is zero or negative, no channel exists and the drain current is zero.

The drain and transfer characteristics for the enhancement-mode N Channel Power MOSFETs are similar to those for the E­MOSFET, as illustrated in Figs. 13.80 and 13.81 respectively. With the increase in gate voltage, the channel resistance is reduced and, therefore, the drain current ID increases. Thus the drain current ID can be controlled by gate voltage control so that for a given level of VGS, ID remains fairly constant over a wide range of VDS levels.

Drain terminal being at the bottom of the V-MOSFET (instead of at the top surface) can have a considerable large area for any given size of the device. This allows much greater power dissipations than are possible in a MOSFET having both drain and source at the surface.

Another very important factor in the geometry of the power MOSFET is the presence of the lightly doped N– epitaxial layer close to the N+ substrate. When VGS is zero or negative and the drain is positive w.r.t. the source, the junction between the P­layer and the N– layer is reverse biased. The depletion region at this junction penetrates deep into the N– layer and thus punch-through from drain to source are avoided. So relatively high VDS can be applied without any danger of device breakdown.

P-channel V-MOSFETs are also available. Their characteristics are similar to those of N-channel MOSFETs, except that the current directions and voltage polarities are reversed.

Another advantage of N Channel Power MOSFETs is that they can be operated in parallel while power BJTs cannot, because in BJTs, VBE drops do not match closely enough. If the BJTs are connected in parallel, current hogging occurs. This means that the BJT with the lower VBE takes more collector current than the others. Power MOSFETs in parallel do not suffer from the problem of current hogging. If one of the power MOSFET tries to hog the current, its temperature will increase. This causes increase in its RDS(on), which reduces its drain current. The overall effect is for all the power MOSFETs to have equal drain currents.

In addition to above, N Channel Power MOSFETs have the advantage of switching a large current off faster than a BJT can, because a power MOSFET does not have minority carriers. Typically, a power MOSFET can switch off amperes of current in tens of nanoseconds. This is 10 to 100 times faster than with a comparable BJT.

Power MOSFET as an Interface:

Digital ICs are low-power devices and if they are to be used to drive a high-current load, power MOSFET can be used as an interface (a device B that allows device A to communicate with or control device C). 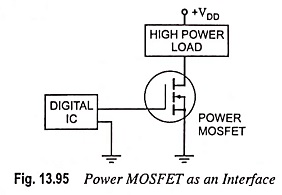